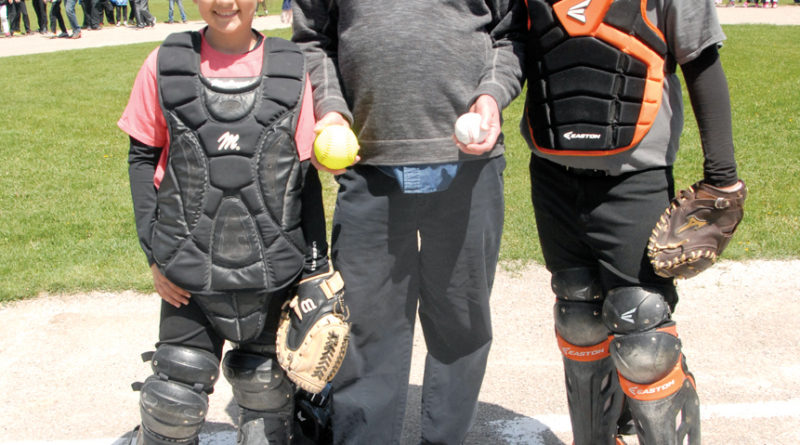 by Peter Jakey–Managing Editor
Rogers City Little League opened it 62nd season Saturday with a parade and opening-day ceremony on Poch Field.
Past president Mike Vogler was honored as the parade grand marshal and threw out the first pitches.

It’s the 78th season of Little League, which started out with humble beginnings as three teams in Williamsport, Pennsylvania. It’s grown to 200,000 teams in all 50 states and 80 countries worldwide.
Mike and his wife Colleen walked the parade route ahead of the waves of baseball and softball teams donned in different colored jerseys. Some youth wore ball caps, while others were keeping warm with knit caps as a brisk wind brought a chill to the Nautical City.
At Little League Park, queen Grace Cousins was joined on the pitcher’s mound and flanked by court members Mariah Brown, Chelsea Meyers, Breylinn Feller and Ava Fenstermaker.
There are 250 players on 26 teams in 2017.
Local musical artist Jessica Adkins sang the national anthem as Army veteran Pat Scott raised the American Flag just beyond the center field fence.
Rogers City mayor Tom Sobeck served as master of ceremonies and acknowledged the many sponsors, that includes businesses, individuals, as well as nonprofit organizations.
“Little League needs sponsors in order to make the program successful and I think it is important we acknowledge them,” said Sobeck. He read all the names before introducing Vogler, the queen and her court.
Mike threw the first pitch to baseball catcher Dylan LaFleche, while Reagan Streich was selected as the softball catcher.
“Al right, 2-for-2,” said Sobeck, after Vogler’s second pitch was thrown toward home plate.
Vogler then led everyone in the Little League pledge.
“Let’s play ball!” proclaimed the mayor, marking an end to the ceremony and the start of the 2017 season. Games were going within a half hour.
President Russ Martin said new field signs were in the works and would have gone up before the ceremony, but the paint did not dry. These are the signs that identify the fields. Along with the Poch Field, which is used for baseball, the rookies play on the Bisson Field. The softball teams play on the Rogers City Lions Club Field. Junior League baseball players and T-ballers will play on the Paradise Field.
Martin also said the equipment room has been re-arranged.
“In the past, the (garage) door was always open,” said Martin. “The kids would come in, play with a bat, play with a ball, and end up breaking equipment.”
Now, much of the playing equipment is locked away.
“So, we don’t have to worry about it wandering off, which has happened a lot over the years,” added Martin. “We spent more than $2,500 on equipment this year and $2,500 last year.”
And behind the scenes, the board will continue to work toward construction of the new Challenger Field between the concession stand/equipment building and Optimist Park.
Officials will be seeking a grant and would hope to break ground in the fall and be playing on it by next spring.
Martin said the board plans on selling raffle tickets to raise money for the match.
“We are going to need gravel and fencing, as well as labor,” said Martin. “The fencing will be the most expensive part.”