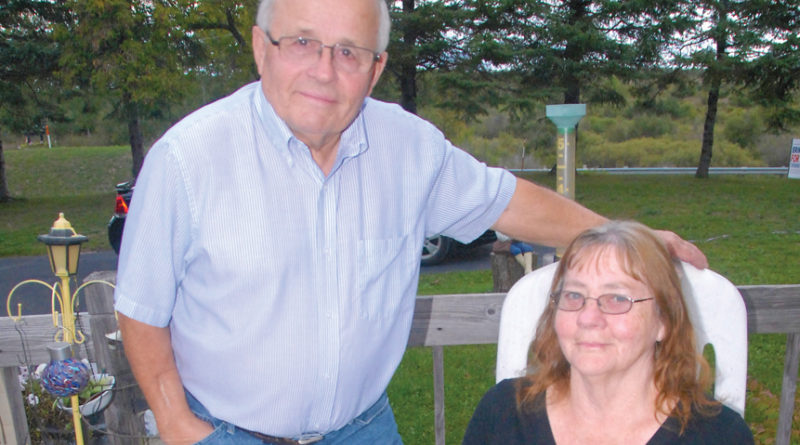 by Peter Jakey–Managing Editor
Two people with more than 63 years of helping make the Christmas season brighter for others have stepped away to allow a new group of spirited individuals to keep it going.
For 43 years, Terry Materna was the backbone of the Onaway Goodfellows.

A labor of love, he would not have retired if the program had not been left in capable hands.
With Materna stepping away, longtime sidekick Marie Stalker, who has been involved for more than 20 years is ready to let it go as well.
It was the grateful people that made it all worthwhile, they said.
“It would take just one appreciative person to do it, too,” said Materna. “It would complete the whole process.”
“We would bring them their Christmas gifts and they would just break down in tears,” said Stalker, “and usually give me a big hug.”
One Saturday every December, sometimes a week to 10 days before Christmas, people receive invitations to go to St. Paul Catholic Church Community Hall to receive food, including a $25 certificate for meat, wrapped Christmas gifts, as well as gently used clothes, books and other donated items.
The volunteers who decided to take over are Charlotte Maynard, Donna Alstead, Terry Jabro, Sandy Collins and Clayton Campbell.
“I had a meeting at my house, showed them all the paperwork, and just last week (two weeks ago), I handed over the checkbook,” said Materna.
“I am praying to God that nobody stops helping,” said Stalker. “I hope it goes on forever.”
“When we first started, there must have been 25 to 30 guys,” said Materna, who has been involved with Goodfellows since 1974.
The ranks dwindled greatly over the years.
“I would call a meeting and nobody would show up,” said Materna, who was not going to let it end even though he was the only remaining Goodfellow.
He ran it with his family for a while, until the volunteers started coming back.
Materna said there was a time when offerings were delivered, but when people were not home, the distribution system changed to invitation letters.
Stalker was involved in a program in the Flint area to make Christmas better for foster kids.
“I found out what Terry was doing and called him and asked if I could help,” said Stalker. She was of course welcomed with open arms.
“We would take all the volunteers we could get,” she said.
Materna said is was all about “helping people of the community. It’s a community effort. Not just me or Marie, it is for the community.”