Walter “Walt” Casimir Szymoniak, 97 years young, of Millersburg, died Sunday, December 23, 2018 at MidMichigan Medical Center in Alpena.  Born in Millersburg July 2, 1921, Walter was the fifth of 10 children born to Casimir and Barbara Szymoniak. He married Maryann Moran November 26, 1955 at St. Paul Catholic Church in Onaway and they made their home in Rogers City. 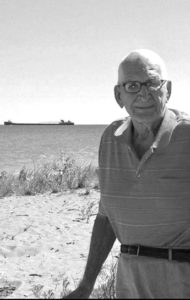 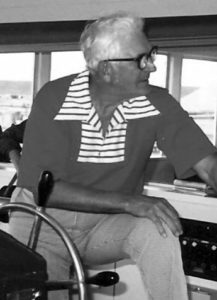 A veteran of the United States Army, Walter served in the China-Burma-India Theater during World War II.  Under the cover of night, traveling the dangerous switchbacks of the Ledo Road over the Himalayas, Walter was tasked with transporting food, supplies and ammunition to Merrill’s Marauders Special Operations Jungle Warfare Unit. After three years of service, he was honorably discharged in October of 1945. In 2016, at age the age of 95, Walter’s service and sacrifice was honored by Honor Flight Network with a trip to Washington, D.C. to visit the World War II Memorial and national monuments. Walter was a longtime member of the Onaway Veterans of Foreign Wars Post 5857.

Shortly after returning home after World War II, Walter began working as a deckhand for U.S. Steel and the Bradley Transportation Company. While working on the freighters and raising a family, Walter earned both his master’s license from the Maritime Academy and his high school diploma through the GED (general equivalency diploma) program. With years of hard work, a wealth of knowledge, and his invaluable experience, Walter moved up through the ranks eventually becoming captain. Starting on the Munson in 1946 and sailing on all freighters in the fleet, in 1982, after nearly 40 years of navigating the Great Lakes, Walt finished his long career as captain on his favorite vessel, the Clymer.

After retirement, the Szymoniaks returned to Walt’s favorite place on earth, the land his parents homesteaded in the early 1900s, the Szymoniak property in Millersburg. It was the place where Walt and his siblings, with their families, gathered each Sunday afternoon for picnics in the apple orchard and came together at Christmastime for the tradition of cutting a Christmas tree for each family; it was the place where cousins played together and the family stayed connected. Retirement also gave Walt the time to pursue the game of golf that he truly enjoyed. It wasn’t the challenge of the game or the competition that he enjoyed so much, but the camaraderie of being with the guys on the golf course, socializing and having a cold beer at the clubhouse, and just enjoying the outdoors.

During his later years and after the loss of his eyesight, Walter quite often traveled to Millersburg on his specially adapted golf cart or riding mower.  He was usually headed to the Three Cedars Restaurant and Clubhouse where he was a special patron and had his own table in the corner with a sign above his chair, “Walt’s Corner.” Being a man who never met a person he didn’t like, Walt enjoyed spending time at the restaurant talking with his friends and meeting new people.  Friendly and good-natured, he struck up conversations easily and loved hearing the stories of the other customers. He also made new friendships in the senior chat rooms he frequently visited on his special computer setup to accommodate his poor vision. Walter loved good music and good food, and it should be mentioned that he had a tremendous sweet tooth.

Walter faced hardships and adversity with a positive attitude and a strong faith in God.  He was a longtime member of St. Paul Catholic Church in Onaway, St. Paul Men’s Club and the Knights of Columbus.  He was a former member of St. Ignatius in Rogers City and was involved with the Knights of Columbus there as well.  He was simply an amazing guy who lived life to the fullest, enjoyed people and loved his family. With his great determination, there wasn’t much that hindered Walt. His wonderful outlook on life, his charm, and his cheerful smile remained with him right to the end of his long and blessed life.

A graveside service and military honors will be held in Millersburg at Riverside Cemetery Monday, May 13, 2019.  A Celebration of Life will follow at the Three Cedars Restaurant and Clubhouse where it was Walter’s request that Plath’s Meats’ hot dogs and beer be served along with some good music and plenty of laughter.