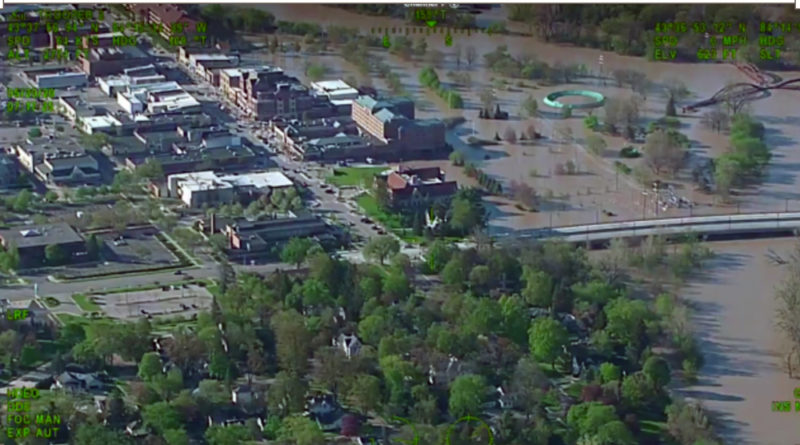 Severe flash flooding in Midland, Michigan, triggered a flood emergency declaration on May 20. Floodwaters invaded homes, farmland and many roads.

Residents in central Michigan on Thursday began returning to water-logged homes and assessing the scope of damage left by what Gov. Gretchen Whitmer described as a “500-year” flooding event. The disaster began unfolding on Tuesday after a long period of heavy rain caused rivers to swell beyond anything seen before, which resulted in two dams failing.

By Wednesday night, nearly 11,000 people in Midland had been evacuated in less than 12 hours, city officials pointed out. They also called attention to a remarkable outcome from the rapid evacuations: There were no major injuries or deaths reported during the disaster. Damages are seen on one of two North M-30 bridges on Wednesday, May 20, 2020 in Edenville, Michigan. (AP Photo/Carlos Osorio)

“I think, like everyone, it was hard to believe we’re in the midst of a 100-year crisis, a global pandemic and we’re also dealing with a flooding event that looks to be the worse in 500 years,” Gov. Whitmer said.

Inspections to roadways and bridges also began on Thursday, with city officials urging residents to stay off parkways like the Currie Bridge until experts can examine its structural safety.

Even as floodwaters began to recede on Thursday, a flood warning was enacted for the day with water levels remaining far above the flood stage. The Tittabawassee River peaked at a record crest of 35.05 feet, recorded by the National Weather Service (NWS) at 4:30 p.m. on Wednesday. The previous record of 33.9 feet stood since 1986.

As of Thursday afternoon, the river was recorded at 31.08 feet. In comparison, the flood stage is 24 feet and major flooding occurs when waters rise to 28 feet, according to the NWS.

Gov. Whitmer warned that the flooding could inundate parts of downtown Midland with as much as 9 feet of water. A flash flood emergency was in effect for areas downstream from the dams, including Midland City and Freeland Michigan. The flooding was so bad it was deemed ‘catastrophic’ by the NWS on Wednesday morning.

AccuWeather National Reporter Blake Naftel was on the ground just south of Midland and described the situation as “rapidly-evolving” as the floodwaters continued rising on Wednesday. Aerial footage captured on Tuesday showed the raging waters completely overwhelming the Edenville Dam.

“Extremely dangerous flooding is ongoing along the Tittabawassee River in Midland County due to catastrophic failures at the Edenville and Sanford dams,” the NWS wrote. “A Flood Warning is in effect, and anyone near the river should seek higher ground immediately, avoid driving into flood waters, and continue to heed evacuation orders given by local authorities. Life-threatening flooding continues today.” The Edenville Dam is located about 30 miles inland from the Saginaw Bay of Lake Huron. Over 80,000 people live in Midland County.

A leading expert who has been studying and inspecting dams and levees for more than 50 years, Tom Wolff, said it is not clear if the breach was due to overtopping, or a break just before overtopping after viewing the video showing the initial break. The Federal Energy Regulatory Commission (FERC) revoked the Edenville Dam’s license for power generation in 2018 after numerous violations and longstanding concerns that the dam could not withstand a significant flood. The commission notified the dam’s previous owner as far back as 1999 that it needed to increase capacity the dam’s spillways, according to Detroit News.

According to Wolff, there are thousands of old and or poorly maintained dams in the US.

“American Society of State Dam Safety Officials (ASDSO) estimates more than 2,170 at-risk dams in the high hazard category. High hazard refers to consequences that include potential loss of life. So there are similar situations all around the US, and it is just a matter of when and where there is a very rare, but very large storm event that leads to overtopping and destructive erosion, or other types of failure,” Wolff said.

Wolff stressed that the public needs to be aware of where such conditions exist, and importantly in the absence of repair, mapping of what areas would flood in the event of a breach.

Concerns among residents and environmentalists grew about the potential of widespread toxic contamination after floodwaters mixed with containment ponds at the vast Dow chemical plant.

According to the Midland County Roads Commission, every bridge crossing the Tittabawassee River is closed as of 10 a.m., local time, on Wednesday. Midland County emergency management told people in Midland City, Michigan, who are located west of Eastman and south of US 10, to evacuate immediately on Tuesday afternoon, according to NBC25.

A slow-moving storm doused Michigan with heavy rains over the period of several days, triggering fear of imminent dam failure and flood warnings across the state.

At least two rivers in mid-Michigan, the Tittabawassee River in Midland and the Rifle River near Sterling, reached their major flood stage on Tuesday afternoon, sending dams past their limits.

The Tittabawassee Fire and Rescue rescued the driver of a pickup truck after the vehicle was swept away while trying to drive on a flooded roadway on Tuesday, according to WNEM. 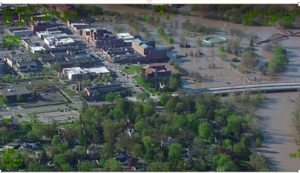 Photos shared by the Michigan State Police depict the rush of floodwaters from the broken dam wreaking havoc. (Twitter/@MSPBayRegion)

“A very slowly moving storm system and cold front pushing through the Midwest has produced anywhere from 3 to 8 inches (100 to 200 mm) of rainfall in just the past week from the western Great Lakes through northern Indiana and into southern Missouri,” AccuWeather Senior Meteorologist Jack Boston said.

Edenville Township residents along Sanford and Wixom lakes northwest of Midland were urged to evacuate their homes prior to the Edenville Dam burst. They were advised to make arrangements to stay elsewhere through Wednesday. Shelters have been set up at schools in the area.

Officials in Arenac County and Gladwin County, Michigan, also urged residents to evacuate ahead of the failure due to the possible dam breach from flash flooding along the Tittabawassee and Cedar rivers. 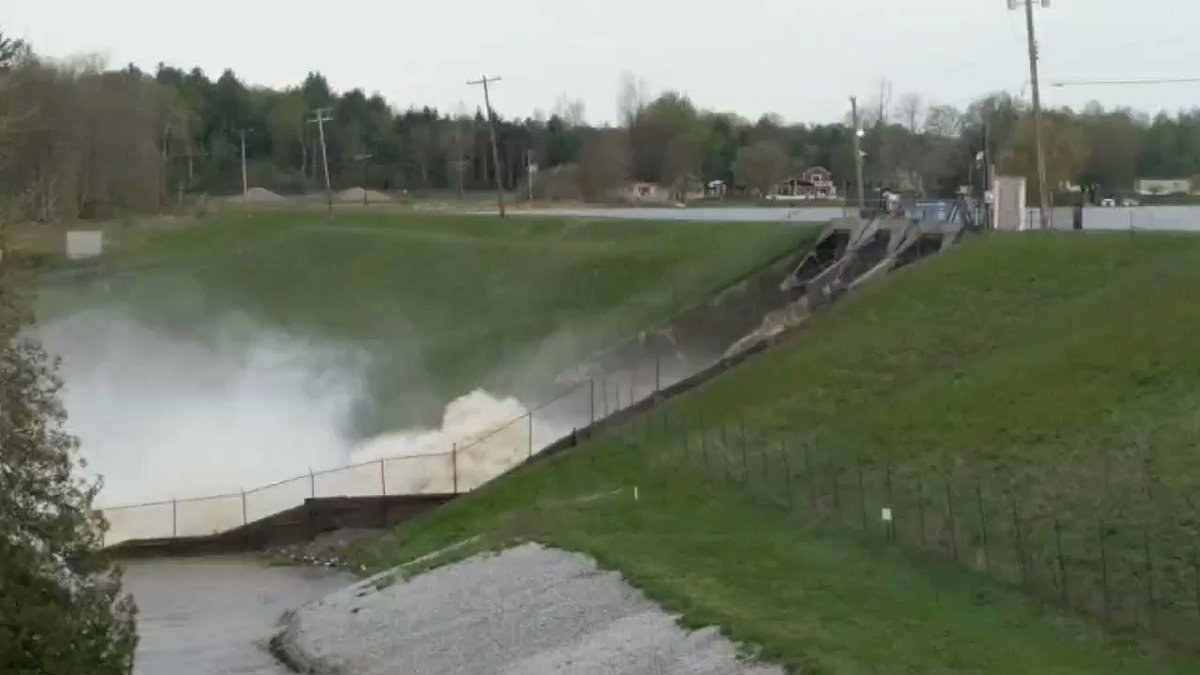 Naftel was in Midland on Wednesday morning, interviewing residents of the area and capturing the flooding devastation.

“I don’t even know what to think. It’s so crazy to see how much water is coming in, we were lucky to be on top of the crest of the hill so it’s staying away from our home but we’ve got a fish or something trying to swim across,” one resident told Naftel.

Floodwaters have reached homes and covered streets in the areas, leaving some properties completely overtaken. As floodwaters continued rising, threatening to cut off road access, emergency personnel warned citizens about the potential dangers of flooding and to find alternative routes if met with road closures.

Officials with Bay County Road Commission said the county is experiencing water over roads in some areas and water issues with draining. The commission is in the process of working on a map of roads closed and water over the road, according to the commission’s Facebook post.

“With all the rain we are getting, the river is rising and roads may be underwater. If you see water over the road, please do not attempt to drive thru it. Find an alternate route. Also, We are also aware there are water issues with draining. We just received a very large amount of rain and it has no where to go. Please be patient over the next couple days,” the post reads, MLive reports. Dan Dionne looks over his former deck outside his home, Wednesday, May 20, 2020, in Edenville, Michigan. (AP Photo/Carlos Osorio)

Around 1 a.m. Tuesday, the Saginaw County Emergency Management Team reported that an Edenville Dam failure in Midland could impact residents along the Tittabawassee River in Tittabawassee and Saginaw townships.

Midland County Emergency Management stated that the Edenville and Sanford dams are “structurally sound but spilling floodwaters” as of around 3 a.m.Tuesday, according to MLive.

le and Sanford dams “are structurally sound but can no longer control or contain the amount of water flowing through the spill gates.” The county is working with the hydroelectric power plant Boyce Hydro to assess the dams.

“At this point, the water is still rising from all of the rainfall we received over the last couple of days and it will continue to do so throughout the day,” the Midland County Central Dispatch Authority said Tuesday.

A flood warning remains in effect for the Tittabawassee, from Midland downstream to Saginaw, and the forecast does not show relief for Midland. 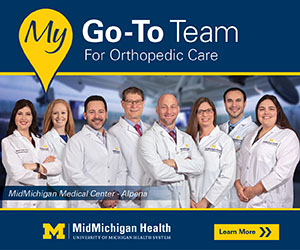