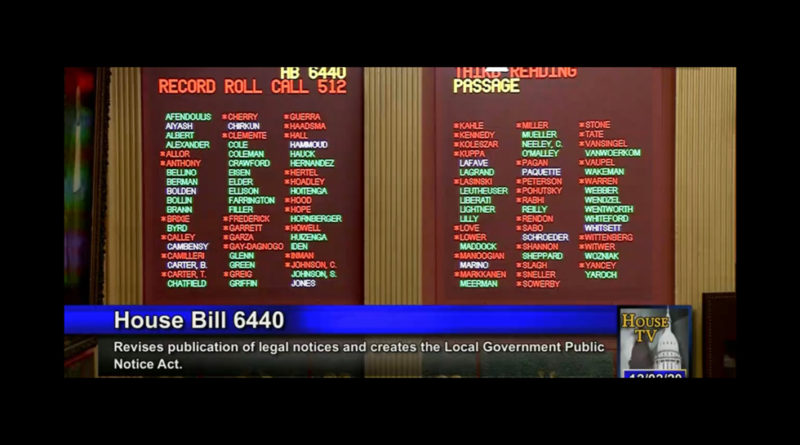 Down but not out. The fate of a major set of bills that could change of face of how the public is informed on government action hit a roadblock but is still in the hopper.

It is back to the caucus room for those in support of HB 6440 after an initial vote was stopped before completion in the Michigan House of Representatives last week. HB 6440, sponsored by a downstate legislator, seeks to take away the requirements of local government bodies to publish public notices in newspapers of record. It comes with a set of more than 100 related bills changing the way the public is notified of pending government action.

The Republican-led House of Representatives, under the direction of the Speaker of the House, is pushing the dramatic legislation in Lame Duck session to remove public notices from the view of the public. Under state statute, moves by government to raise taxes, construct public facilities, rezone properties or other actions must be placed in local newspapers before action is taken. That gives the public adequate notice to comment before changes are made. The proposed law would allow these notices to appear only on various government-run websites, free from independent checks and balances.

Supporters of the bills argue that newspapers do not exist in many counties, when in actuality only one county in Michigan, Keweenaw, does not have a local newspaper.

The proposed legislation is opposed by many legislators including the one who represents Presque Isle County.  Rep. Sue Allor (R. Wolverine) is one of the 51 representatives who cast a no vote Wednesday, choosing to not follow the Republican leadership who gathered 47 yes votes. Allor represents Presque Isle, Alpena, Cheboygan and Alcona counties. Allor voted against the measure which would change the way governments are required to inform the public of actions, choosing to keep the current system of public notice in newspapers.

Allor took office in 2017 filling the seat of the late Peter Pettalia. Pettalia often voiced his opposition to notions of pulling public notices from newspapers and supported keeping the sun shining on transparent government so much so that the Michigan Press Association (MPA) named its annual government Sunshine Award after him. Allor has continued in Pettalia’s tradition of supporting transparency in government. She won reelection l

But, HB 6440 could come up again in Lame Duck session yet this week.

“We won a small battle Wednesday when the legislation that would remove public notices from newspapers couldn’t garner the votes needed to pass. However, we are not done.  They can still take this up anytime in the next few weeks. Unfortunately, we have heard that Speaker Lee Chatfield and other advocates of this bill seem determined to move forward and are working behind the scenes to get the votes they need. Deals are being offered to some who voted no if they will flip their vote,” said Lisa McGraw, public affairs manager for the MPA.

“We’ve also heard that some of those supporting this legislation are doing it for retribution.  One representative who is unhappy with a story his local paper wrote about him actually told us “you people need to learn, actions have consequences,’” she said.

“Placing public notices in local newspapers is a tried-and-true method of notifying the public for many reasons. It provides outreach of important information. It provides a check and balance on the actions of local government. People see them. People read them. People learn what their government is proposing to do,” said Dirk Milliman, chairman of the public policy committee for MPA.

“Notices in print become part of a permanent record. Today’s newspaper will be kept forever. The notices in it are part of the permanent record, just like the news stories, the obituaries, the sports reports. Years from now you can go back and look them up. The record will be there. Unlike information on a website, which can be deleted, altered, removed, reposted, corrected, changed, hacked. Not permanent.”

Instead of requirements that have been on the books for decades to insure the public had an opportunity to view a notice from local government, the bill would allow notices to go on government-controlled websites. The measure would require any governmental entity that does not have a qualifying website to create and maintain one no later than Dec. 31, 2021.

The local government entity, including city, schools, county or township government, could enter into an agreement with a local media company to publish the notices both online and in print, but that is not required.

To become law, the bills would have to be approved by the Michigan House and Senate and be signed by Gov. Gretchen Whitmer.