Wolverine CEO Eric Baker and Ken Bradstreet, director of community and government affairs, answered questions posed by Advance editor Richard Lamb about the Wolverine Clean Energy Project, how it started and how it ended.

Advance: What led you to the Rogers City site and were any other sites under consideration back when you began this project?

Baker: We had looked at two other sites in Michigan prior to choosing this site. One site never really got much traction at all had some big problems. Another site that could have worked also had some challenges. When we came back and looked at this site again, we thought if the owner of the quarry was interested in making it work, it was a phenomenal location. We went to the quarry in Sept. 2005 and then spent the next six months getting the legal groundwork set so we could announce it to the community.

Advance: It sounds as if the leadership at Calcite was about as cooperative as they could be, right from the beginning. You had scouted out a site and Mike Lundin sort of showed you a better location, right?

Baker: That is kind of a funny story. We went to the first meeting (to negotiate for the land) and we are a little excited and not sure how accepted we are going to be. After about 10 minutes—and we were not even through our pitch book, Lundin stood up and said “You are building it on the wrong spot. You need to build it here.” He looked at his plant people and it was off to the races at that point. 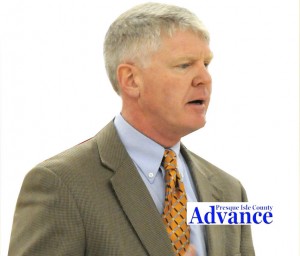 Advance: He (Lundin) bought into the idea right away?

Baker: Oh yes. It was his recognition of the opportunity not only for the site but also for his operation. It was a number of things like his ability to sell stone to us and there were so many synergies that he recognized. Even when Carmeuse took over, Tom Buck recognized the same thing. They have just been phenomenal to work with.

Baker: That is what concerns me. There are so many things that go above and beyond just the power plant here that were exciting to us.

Advance: But are there any other coal-fired power plants being built anywhere?

Baker: I am not aware of any plant that is commencing construction. There have been two or three in the United States which were a little bit ahead of us and got through the government and got finished.

Advance: Looking back at the timeline of this project, we remember it was nearly 1,000 days before the state gave a decision on your major permit. During that time, was it ever a realistic consideration to scrap the project?

Baker: No. We expected to come upon a protracted fight. The part that really surprised me was the shift in direction from the Granholm administration in terms of the executive order, which was later deemed to lack constitutional grounds for the denial. That is when I began to have grave concerns about the project because it was clear to see that there were not just forces within the state, but there were national forces, which were working in a coordinated manner trying to block this particular effort.

Advance: Do you think the government regulations represented the views of the majority of the people?

Baker: No, I don’t think so. I do know that the opposition is very well funded and very well organized.

Advance: When you announced plans for the power plant back in 2006, you were very optimistic. Did you have any idea at that time that it could end like it has today?

Bradstreet: We thought by the end of 2013 we would have a finished product.

Baker: We announced the project and would have expected at that point that at this date we would be fully operational. There was no reason it couldn’t have been. Our permit was completed in 2007. So from 2007 until now, there has been no material change in what we had proposed.

Advance: How close were you in the design to a finished plan?

Baker: We stopped short of the detailed design phase when things began to get bogged down.

Advance: What are the consequences to not building the power plant?

Baker: I think that the economic implications and the tax creation speak for themselves. It would have generated millions and millions of dollars in incremental tax revenues for this county and this area. The job creation is probably the hardest part because that multiplies so many times. These are really high quality jobs, high paying jobs. On the electrical side, Michigan needs additional generation and it appears that we will have more generational retirement than we will have generation being built over the next five years.

Advance: The opposition would say we are better off without this power plant.

Advance: What do you have to say to them about those who supported your effort their support?

Bradstreet: There was a real vocal message sent by the community at that first DEQ hearing. There were probably 600 people in the gym and at least half of them were wearing Wolverine T-shirts. It was just an overwhelming level of support, which I think is probably something that the DEQ rarely sees. Their hearings are typically filled with opponents and protestors. In this case, it was a strong community voice of support for a project in a very large venue. It was a very heart-warming level of community support that was very encouraging to us.

Baker: I can’t express my personal thanks and the thanks of the Wolverine staff and board for the community supp

ort. It was overwhelming. It wasn’t just the support at the big things, like the public hearings. But the personal support we got, like a little sign on a marquee or something painted on the window of a business or the signs that were made in a garage to put about town to support us. That is the overwhelming part. Sometimes we are successful in business and sometimes you work through all of it. I have never been a part of something that is so poignant in this special community. The people are very unique and special and there is a lot of pride here. That is the part that is really, really difficult in all this.

(More Wolverine coverage is in the Dec. 19 edition of the Advance)