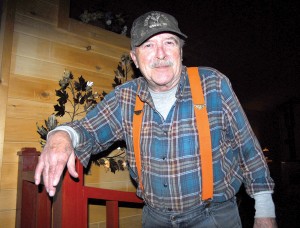 Some mornings, Dan McCallum, 73, wonders to himself. “Why am I still here/”

In 2005, the Bismarck Township man, who lives in a secluded home near Lake May, flatlined twice on the way to hospitals.

Five years before, it was a brain aneurysm.

And before that, he was on a plane that flew into high-wire electrical lines and crashed into a swamp. Then there was the near electrocution helping a neighbor fix a pool filter.

It’s almost difficult to believe, considering all he has been through and the countless days and months of recovery, but the family has a lot to be thankful for.

Chris, his wife of 30 years, is thankful for the extended time with her husband.

“Every day is such a blessing,” said Chris. “We are best of friends. We are what the young kids call soul mates. We go to bed together at night and we wake up together in the morning. We love each other’s company.” She suffered a cervical spine injury in a bear/vehicle accident a few years ago and has been receiving his care.

“We both have been taking care of each other,” said Chris. “For better or for worse. For richer or poorer, and in sickness and health.”

Dan owned a cutting tool shop in Farmington Hills. He had a love of the outdoors and enjoyed the firearm deer season just like the next person. He was a passenger on a Cessna that left Detroit City Airport in heavy snow and fog. The pilot was going to pick up two hunters at Pontiac Airport and then continue to Alpena. The final destination was a Presque Isle hunting camp.

During the flight, Pontiac shut down the airport due to the weather. He said they could not make contact with the tower. “We took the plane down to get under the weather and see where we were at. As we did that, there was an explosion and a bright blinding light. And we nose dived into a swamp.”

Dan reached behind to grab his jacket and there was nothing there. His jacket and the back of the plane were completely gone. The back wheel had pulled the wire down, and as a result, there was a power outage in greater Pontiac, including Pontiac Osteopathic Hospital.

He walked away from the crash and high-voltage wires, but it was not the first time he had survived an accidental electrocution.

The summer before, he tried to help a neighbor repair a pool filter. “He put a new plug in and there was one strand of wire. It was sticking out just a little bit. I’m standing in the water in my bare feet.”

It’s not hard to figure what happened next. He was thrown 15 feet into a cyclone fence. That may have been the first life, but by no means was it the last. Nowhere close.

Dan enjoyed training beagles to hunt rabbits and became involved in field trials with the canines.

“I had some pretty famous dogs, including some grand champions,” said McCallum. “That turned into a business for a while.”

Oct. 29, 2000 is a day that forever changed his life. He was tightening a knot on his property when he heard a snap that accompanied by the worst headache of his life. “I went down,” said Dan. “I crawled over to the porch.” Chris called for an ambulance.

“Our good friend Keith Froelich and Tom Hanson came out from the store,” said Chris. “I thought he had a brain aneurysm. He was taken to Cheboygan and they determined he was bleeding from the brain.” He was transferred to Petoskey and was treated by Dr. Merle Rust.

“The frontal area is where a blood vessel had burst,” said Chris. He had recovered, got out of the hospital, and started to rehab in Rogers City, but something was not right and he had to go back a handful of times. He was operated on four times in six weeks. The rehab continued until February 2001.

Dan had been feeling solar plexus pains for three days. “I was eating a lot of spicy foods barbecuing,” said Dan. In addition, he was drinking wine. Mixed with Dan’s stubbornness, it almost was a lethal combination. “Every day it was getting worse and I would eat more and drink more wine. Finally, I told Chris after three days that I can’t take it anymore.”

This is when most folks call for help. Not Dan.

“I went for a walk in the woods,” said Dan. “I said, ‘I am going to walk this off. I’m going to get away from everything.’ I got out to a two-track and looked back at the house and Chris is standing out on the porch watching me. I could see her head is down and she is crying. I came back. She has saved my life so many times.”

Chris already had called for an ambulance.

During the ride to Cheboygan, his heart stopped for an unknown length of time. They revived him and later transferred him to Northern Michigan Hospital in Petoskey where again, as Dan says, “I died.” The only bright lights he saw were on the operating table when he woke up. Doctors wanted to put an experimental stint in. At the time, some stints were lasting only a few years before clogging.

Dan agreed, because that’s what people on their death bed do. It was under the condition that they would have to cut him open again in a year to check the progress. It has held up just fine with no complications.

He has held up well too.

These days, Dan is still working around the house, cutting his own wood and enjoying the companionship of his supportive wife.

“I’m most thankful for my wife and friends that helped me through my long recovery, including some special friends, Betty Jo and Lester Schultz,” he said. “I’m very, very thankful to be living in northern Michigan.”

And to still be alive.