The U.S. Geological Survey awarded a $9.7 million contract to Crittenden Construction out of Alpena, March 5 for the construction and renovation of the USGS Great Lakes Science Center Hammond Bay Biological Station. The renovation is a joint effort between the USGS and the Great Lakes Fishery Commission. 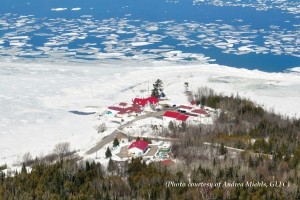 The contract will be used to construct a new laboratory facility, demolish vacated structures, construct new water intake and discharge lines from Lake Huron and overhaul the water system for all facilities. The groundbreaking for the project will take place on June 25. Construction on phases 1 and 2 will begin this year with phase 3 beginning in 2017.

“The investment we’re making in the Hammond Bay lab is an effort to capitalize on 60 years of world-renowned sea lamprey research that has led to one of the most effective invasive species control programs in the world” said Russ Strach, USGS Great Lakes Science Center director.”In this lab, the next 50 years of Hammond Bay research will continue to support control of sea lamprey in the Great Lakes, safeguarding the $7 billion fishery.”

The new lab will use ultraviolet treatment capabilities to completely prevent invasive species from potentially entering or leaving the new facility. Science and technology applied at the lab can be used across the nation on other pressing resource management challenges.

The USGS biological station has pioneered development of scientific approaches to sea lamprey control, such as use of pheromones (odors) to attract lampreys to traps or repel them from streams.

This technology has been shared with east coast scientists working to restore the American eel and west coast scientists to restore the Pacific lamprey. With this new construction, the USGS Great Lakes Science Center will have three fish labs in the Great Lakes basin working together to support invasive species control and native species restoration. The other labs are located in Ann Arbor and Cortland, New York.

“The USGS Hammond Bay Biological Station is a vibran

t place, with scientists from far and wide conducting research essential to Great Lakes restoration and management,” said Great Lakes Fishery Commission Vice-Chair David Ullrich, the Executive Director of the Great Lakes & St. Lawrence Cities Initiative. “The Great Lakes Fishery Commission has, since its inception in 1956, relied on work conducted at this station to provide the foundation for sea lamprey control, native species recovery and ecosystem science. This major renovation will ensure our ability to attract world-class scientists to the region and lead innovative research for the 21st century.”

The USGS Hammond Bay Biological Station was established in 1950 under the Bureau of Sport Fisheries to develop control measures for the invasive sea lamprey, which had decimated Lake Michigan and Lake Huron populations of larger fish, such as lake trout, the top native predator. The facility, however, dates back to 1879, serving as a U.S. Coast Guard station until World War II. The historical building on the site will be renovated and preserved as a Michigan landmark.