For the fifth-straight year, coach Karl Grambau will lead his softball team into the regional round. The hot-hitting Hurons defeated Hillman 12-2 and Onaway 9-1 to earn the right to play Frankfort in the regional semifinals Saturday at 12:30 p.m. at Lake Leelanau St. Mary.
Frankfort, ranked ninth in the May 24 Michigan High School Coaches Association poll, defeated Suttons Bay 24-1 and Lake Leelanau St. Mary 19-3 to move to the regional round.
Rogers City came out smoking in the district semifinals against host Hillman, scoring seven runs in the first inning. Freshman pitcher Jayna Hance led off with a single, sophomore shortstop Kayla Rabeau followed by reaching on an error and then senior catcher Sarah Meredith drove in Hance with a single. Sophomore third baseman Hannah Fleming followed with a three-run homer to jump-start the drive to the district title. 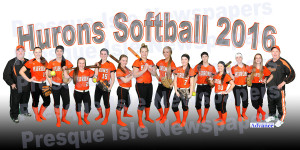 “We have really come a long way from the beginning of the year from where we were to where we are now,” said coach Karl Grambau. Grambau said the big first inning against Hillman sparked the team. “I guess it was a good thing to be visitors and get the bats going first.”
The Hurons banged out 15 hits with Rabeau hitting a homer and two singles, while Meredith and junior right fielder Hannah Dittmar getting three singles each.
Hillman threatened in the third inning, scoring two runs on only one hit, two walks and two Huron errors, but that was the only challenged faced. Hance set them down in order 1-2-3 in the fifth, sixth and seven innings.
Rogers City added one in the fourth, two in the sixth and two more runs in the seventh to earn a 12-2 win over Hillman.
Onaway faced Rogers City for the district championship and again the Hurons’ bats came alive in a 9-1 win. Onaway drew first blood, as Jade Galer led off the bottom of the first with a single to left and later scored on freshman second baseman Kennedy Crawford’s single. But that was it for the Cardinal offense. Onaway reached second base only three times after that. Kayla Metty had a one-out double in the third inning, but was stranded, Metty reached second on an error, but couldn’t advance and Alison LaFave singled in the fourth inning but was left on second base.
Two runs in the third came as Hance and Rabeau, who had four hits in the game, each singled and came around to score. Rogers City scored four more in the fourth and added three in the fifth.  Hance and Megan Brege each had two hits while Taylor Fleming had a home run in the fifth inning. Hance went all the way for the win.
“We’ve had some tough luck on this field, we lost to Posen and Onaway here before in tournament play, but we played really well today and its a tr

ibute to how hard these girls have worked,” Grambau said.
“I told them to keep their heads up and how I had many compliments on their competitiveness and sportsmanship throughout the year, not only from other coaches but from other fans and umpires,” said Onaway coach Jodi Brewbaker. The Lady Cards finished 24-8.
The Hurons (27-11) ranked sixth behind Coleman, Unionville Sebewaing Area, Rapid River, Kalamazoo Christian and Inland Lakes, won the state championship in 2014 after making the final four in 2013. Coach Grambau coached the 2004 team, which finished as state runner-up in Division 4.

Crawford’s walk-off shot lands Onaway in final, Posen battles to the end
Onaway freshman Kennedy Crawford lined a walk-off home run in the bottom of the seventh-inning to break a 1-1 tie and send the Cards to the district championship game.
Callie Selke, who started the game on the mound for Onaway and struck out 15 Posen batters, started the bottom of the seventh with a walk. That’s where she was when Crawford turned on a 3-2 change up and put it over the left-field fence.
“I told Kennedy during a time out, that you have done it all year for me,” said Brewbaker. “Do it some more and she did it. It was amazing.”
Onaway led most of the game after taking a 1-0 lead on a throwing error in the third. Both teams had scoring chances throughout the contest, but the score was 1-0 going into the top of the seventh. Posen’s Taylor Roznowski and Lyndsey Romel walked and moved to second and third on a sacrifice bunt by Hannah Stone. Kayla Lenard came to the plate and reached on an error that scored Riley Krajniak, pinch running for Roznowski, to tie the game.
The game appeared to be headed to extra innings, before Crawford’s dramatic end.
“We said we were going to leave a lasting impression on everybody who watches this game and thought the girls did that today,” said Posen coach Glenn Budnick.
Budnick was pleased with the pitching of starter Jolene Reese and the performance of the defense behind her. Brewbaker told her squad before the game “To beware of Posen” after the Cards defeated them during the season.
“Posen is a team that does not give up and they are well coached. I told them its going to be a battle and it definitely was a battle,” said Brewbaker.
The Vikings started 1-9 at the start of the campaign and finished 17-5 over the final 22 games.