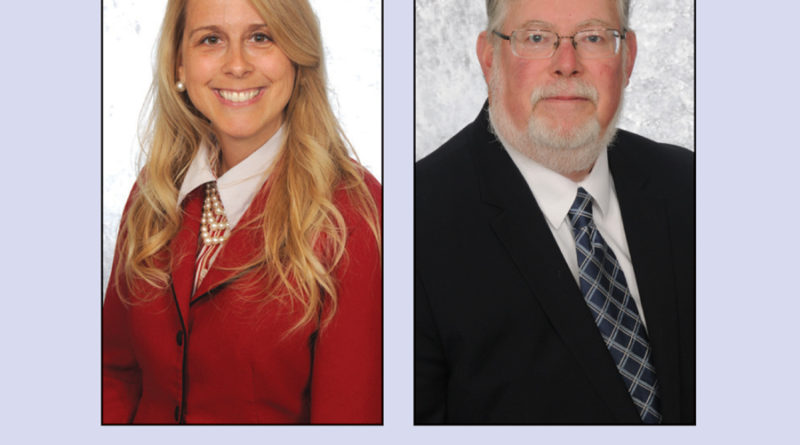 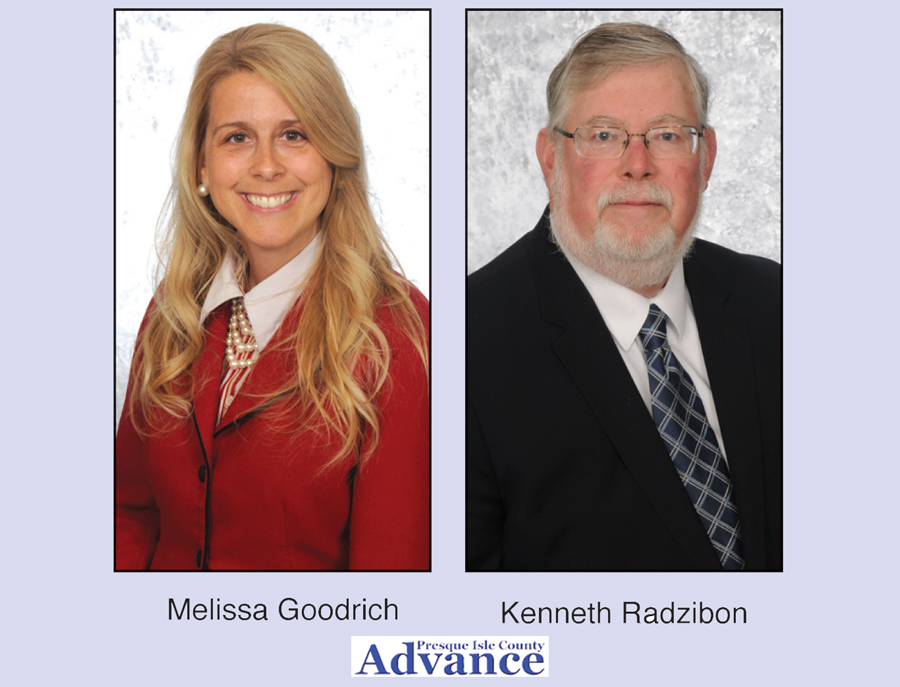 by Peter Jakey–Managing Editor
There are two Republican candidates on the ballot in Tuesday’s primary election for Presque Isle County prosecutor.
Kenneth Radzibon and Melissa Goodrich are vying to take over the office after Rick Steiger decided to not seek another term. He had been prosecutor since succeeding Donald McLennan in 2006.
Back in March, Steiger issued a press release stating it was time for a new person to take over.
Steiger was investigated for prescription fraud in 2011, but the charges did not stand up in court. Following subsequent appeals by the state, Steiger filed a lawsuit against law enforcement agencies involved in the investigation and later filed a whistleblower suit against four of the five members of the county board for removing him as legal counsel.
While this was ongoing, some of the biggest criminal cases in decades were prosecuted in the county.
That is the background leading up to the election of a new prosecutor.
The Advance previews Tuesday’s primary with Goodrich and Radzibon seeking votes to win and move on to November.
Melissa Goodrich is the current assistant prosecutor. Previously, she was in private practice for approximately 10 years. She is a graduate of Thomas M. Cooley Law School with a Juris Doctorate degree, as well as a bachelor’s of science degree at Northern Michigan University. Goodrich received training at the National Advocacy Center and at the Hillman Advocacy Program. Born and raised in Lansing, she moved to northern Michigan 12 years ago. She has three children ages 17, 15 and 10.
Kenneth A. Radzibon grew up in Detroit, but has lived in northern Michigan for 37 years. While his family has owned property in the area for 70 years, he has been a property owner for 35 years. He is a bachelor graduate from the University of Michigan and a Juris Doctorate graduate of Detroit College of Law where he was in the top 10 percent of his class. He has been an attorney for 39 years with experience as the assistant prosecutor, probate judge and circuit court referee.
Why are you running?
Goodrich: I left private practice because I wanted to make a difference by helping people even more. And my prayer was answered. One of the many examples is that I have worked with child victims to convict child molesters.  One of those victims recently informed me she is going to college this fall and that I helped make that possible.  There are no words for that moment. I care deeply about the work I do and I am committed to Presque Isle County for the long term.
Radzibon: I was encouraged and asked to run by hundreds of citizens in Presque Isle County over the past two years. They constantly expressed dissatisfaction with the prosecutor’s office due to the discord between that office, law enforcement and county government. They always referred to the lawsuits filed by the prosecutor as the source of their dissatisfaction and wanted a change. I ran to give citizens a choice in this election.
Do you support the recently instituted diversion program?
Goodrich: I support the prosecutor diversion program. It gives first time offenders a second chance, and other defendants under special circumstances. The program has allowed defendants to continue in the military, keep jobs, and keep college scholarships. The coordinator has a master’s level education and runs the program in a cost efficient manner while successfully rehabilitating defendants.
Radzibon: While the concept of a diversion program is a good one, I question whether that type of program should be run by the prosecutor’s office as opposed to the court system. Also, as it is implemented now, the program has caused a loss of revenues to the library and county due to fewer cases processed where fines and court costs are ordered and collected.
Do you support the opinion of Mr. Steiger that the sheriff’s department should have been investigated by the DOJ?
Goodrich: It is time to stop rehashing old controversies and for Presque Isle County to move in a positive new direction. I am the candidate to make that fresh start happen. I will work with the county commissioners and all law enforcement to make sure the community is confident that all complaints are properly investigated; the victims are heard; the matters are resolved in a just way; and the defendant is treated with humanity during the process.
Radzibon: Absolutely not. In my capacity as civil counsel to the sheriff, I reviewed many of the investigative reports conducted by other entities over incidents at the jail. I saw no conclusive facts in those reports that warranted an investigation by the DOJ. Apparently, the DOJ felt the same way when they declined to investigate.
How do you think the sheriff’s and prosecutor’s office should best work together?
Goodrich: Communication. It is important to build a strong foundation of respect so that even when people do not agree, there is trust that everyone can voice their opinions openly. My plan would be to work with the elected sheriff in ensuring there are regular monthly meetings between the sheriff and prosecutor to discuss what is working and what is not working and together, implement more educational programs for the children in the community facing new challenges with social media, bullying, drugs and alcohol.
Radzibon: Trust and communication need to be a priority. I have the trust of law enforcement, as many of them are supportive of my candidacy. The working relationship between those offices are currently strained. This situation will improve if I am elected. I intend to also hold regular meetings with law enforcement to allow both offices to discuss and hopefully resolve problems that occur.
The term of county prosecutor is for four years, starting Jan. 1, 2017.