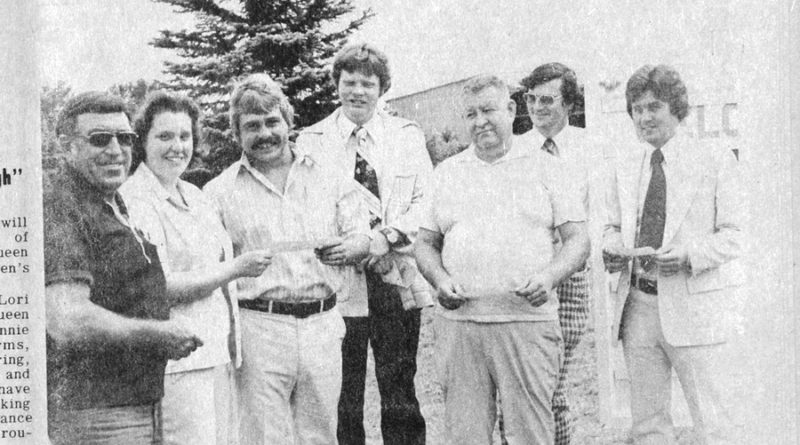 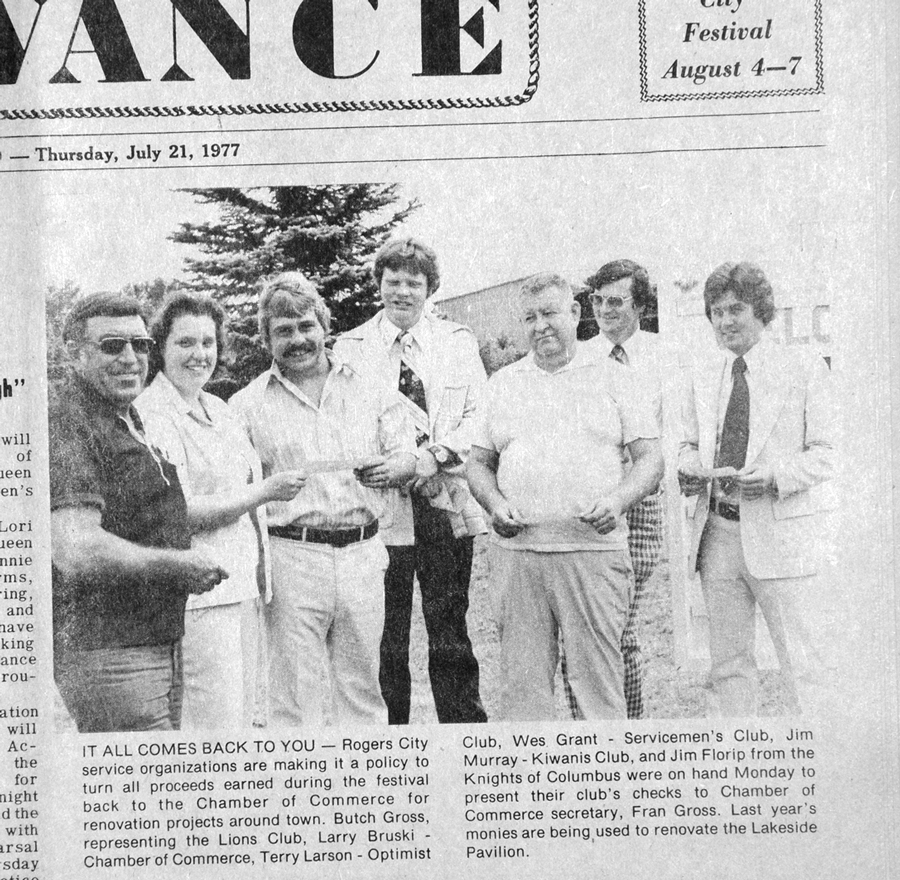 by Richard Lamb–Advance Editor
This is the 40th Nautical City Festival, beginning in 1977 after the city declared itself the “Nautical City” the year before. Since then, many community volunteers have worked together to put on the annual event.
The first chairman of the festival committee, Larry Bruski, guided the efforts of the volunteer committee. Sparked by the Rogers City Area Chamber of Commerce, the festival committee included two voting members from the Knights of Columbus, Optimist Club, Kiwanis Club, Servicemen’s Club, Lions Club and the chamber.
For the first festival, merchants used the occasion to line the sidewalks with bargains and festival buttons were used as a fundraiser and admission to many events.
Events at the first festival included a tour of the Coast Guard cutter Bramble, a teen dance with the popular regional band Ceyx, a water carnival, the Polish dinner at St. Ignatius Catholic School, a concert by the city band, a sing-a-long in the tent, fireworks on festival Friday, and an arts and crafts show on the courthouse grounds.
Sausage-maker Phil Nowicki made headlines as his crew created an 8,773-foot sausage to break a world’s record.
We present a few highlights from over the past 40 years. 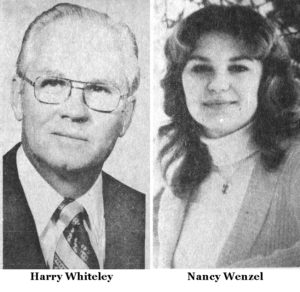 Advance publisher Harry Whiteley served as first grand marshal and Nancy Wenzel was the first Nautical City Queen. While the parade marched down Third Street, a flyover came at low altitudes from 12 Air Force airplanes on a training exercise at Phelps Collins Airbase in Alpena.  People had the chance to tour the John G. Munson over the weekend.
Featured bands included J.T. and the Imperials and Marv Herzog’s Bavarian Polka Band. Admission to hear the bands was $2.
35 years ago:
Bagpipers highlight of 1986 grand parade
A performance by the Sault Ste. Marie Pipe Band, perfectly coordinated in their kilts, played haunting melodies in the 1986 festival grand parade, as reported by the Advance.
The theme of the parade was “Winter, Spring, Summer and Fall” as grand marshal John Witulski rode as the honored participant.
Nautical City Queen Dayna Belusar’s court included Ruth Dowdell, Jean Mayes, Shannon Mertz, Cindy Selke and Sheri Rygwelski who rode on the queen’s float.
Gwen Wood, chairperson of the parade, reported there were 39 entries in the parade, up five from the 1980 event.

25 years ago:
1991 festival features bike race around courthouse
Nautical City Festival Committee chairman Merlin Little said the 1991 festival should show a profit.
“Judging from the comments I received, it was a very well-run festival and I think it will be profitable,” Little said. A full financial report was presented to the six member organizations in the fall. 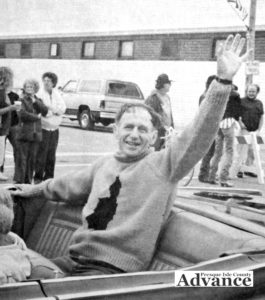 Little cited large crowds at the arts and crafts show, larger than normal attendance at tent events and beverage sales above last year as indicators of the success of the annual community festival. A larger tent and eliminating canned beer sales helped improve the celebration’s profitability and convenience, he said. 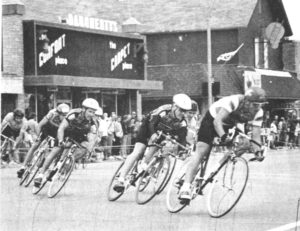 A large crowd watched 29 talented bicycle racers streak around the courthouse square, as Marcus Opie served as race director.
Bill Barrett, longtime teacher and father of the Huron wrestling program, served as grand marshal.
20 years ago:
City celebrates 125th anniversary of founding in 1996
A cake for 1,000, commemorating the 125th anniversary of the founding of Rogers City was cut by grand marshals Fred and Rosemarie Trafelet along with Miss Rogers City Andrea Sobeck and her court. 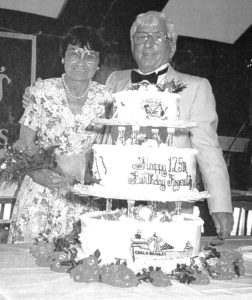 According to festival executive director Larry Wissner, the festival came off without a hitch. One of the best-liked attractions was the stage band The Wayback Machine, which played in the festival tent Saturday and Sunday.
Festival committee members included Don Hampton and Brien Roth, Lions Club; Bill Claus and Terry Flewelling, Servicemen’s Club; Jim Przybyla, chairman and Karl Vogelheim, Knights of Columbus; Darlene Park and Jack Smitka, vice-chairman, Kiwanis Club; Jim Garner and Mike Klann, Rogers City Area Chamber of Commerce: and Larry Patterson and Jude Bluemle of the Optimist Club.
“It’s too early to tell how we did financially. We will give a full report to the clubs in the fall,” Wissner said after the events ended festival Sunday. Each of the six organizations received a full financial report.
10 years ago:
30th festival wraps with $6,000 fireworks show
“It takes a village to plan and organize a festival, and this year the Nautical City Festival managed not only to plan and organize, but to make certain of the festival’s success,” penned staff writer Amanda Polaski.
The festival kicked off with a dinner served in the festival tent by Hospice of the Sunrise Side, which served more than 250.

Tony Przybyla was grand marshal and Miss Rogers City Brittney Hoffman greeted parade-goers on the festival float. The festivities concluded with a $6,000 fireworks show on Sunday.

(About the author: Richard Lamb is in his 27th year as editor of the Advance. He is a past president of the Rogers City Area Chamber of Commerce, the Rogers City Optimist Club and past member of the Nautical City Festival Committee. He is also proud father of Jordyn Lamb, Miss Rogers City 2008.)