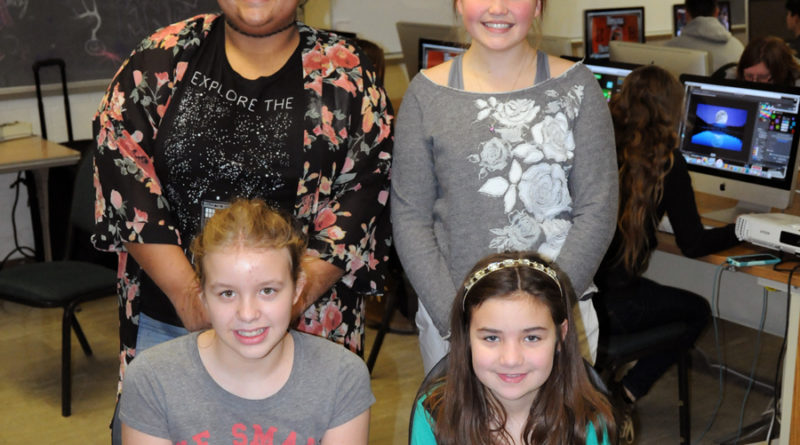 by Richard Lamb–Advance Editor
For the second year in a row, students from Rogers City High School (RCHS) were honored at the Thunder Bay International Film Festival. This year’s theme of “biodiversity is” inspired student submissions from Ben Witter’s classes at RCHS.
Taking first place in the high school category, and earning the people’s choice award was a three-minute film by DyShauna Rutherford.


“Despite the fact that I am surrounded by nature, I never really took the time to truly understand the variety of life around me, until curiosity got the best of me,” she says in the film’s opening. She used interesting graphics and a combination of wide-angle shots, both indoor and outdoors, and close-up images to tell her story.
“From the smallest of sprouts to the tallest of trees, we are united by them,” she says in the closing moment of the piece. “To me, biodiversity is unity.”

The contest gave her a chance to show off skills refined over several years, she said.
“I’ve been doing video-making for three years and photography for six years, so I have a little bit of experience in it,” Rutherford said.
She created her film with Wondershare and Windows Movie Maker and filmed the video on a Canon Rebel T5.
Camryn Bullock’s film centered on home, featuring the many animals where she lives with her family. Her 3:49 minute video took second place at the film festival in the high school category.


“I have grown up with cats and dogs and horses. We have even had squirrels at one time that were orphaned, so we had to take care of them. I’ve always been outside,” Bullock said. She narrates the film, which stars her dog Gus, horses Utah, George, Dolly and Chance. Her film mixes interesting nature videos with still images showing beautiful snow scenes at her home.
She used a GoPro Hero4, a GoPro Hero5 and an iPhone 4 to shoot the images for her video.
“I love everything about making movies. I was always interested in it when I was younger, because my friends and me were always making homemade movies. I plan on pursuing this passion and study this in college,” Bullock said.
Isabella Pitts and Anglee Piechan teamed up to win the middle-school first-place award. They are part of a club, which meets at lunch hours. Muriel Garms and Lily Clement also entered the competition.
“The class gives them the tools to use to tell stories. It is really about storytelling. It gets their voice out there where they can say what they feel they need to say. The class gives them the opportunity to learn how to use the tools to do that,” Witter said.
All 16 students in Witter’s seventh-hour class submitted an entry to the film festival.
“I was so proud of them to sit and watch as an audience member, but also knowing the work they put into it,” Witter said.
The class will benefit from two grants totaling more than $5,000 which will be used to upgrade equipment. Carmeuse Lime & Stone also gave a grant as a sponsor of the program.
All of the videos from the contest, as well as many other interesting videos produced by the class can be found on YouTube by searching for the channel Rogers City Area Schools on the YouTube site.