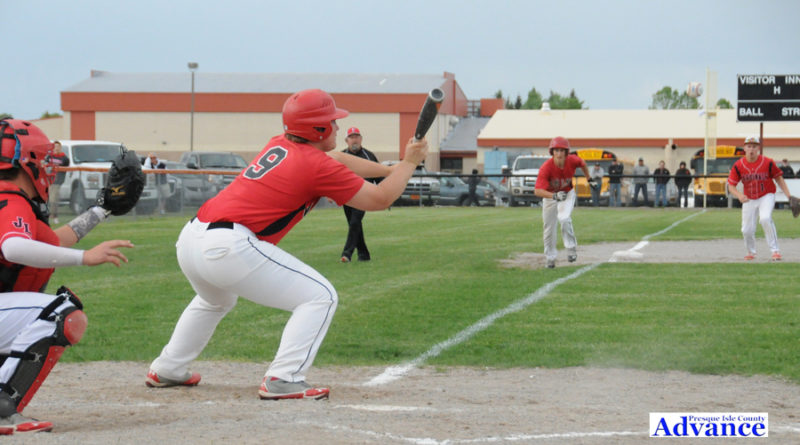 The game can turn quickly.
One moment, the Posen baseball team was two outs away from winning and moving on in the state tournament. Just as quickly as the Vikings took a one-run lead in the bottom of the sixth, the sweet taste of victory was snatched away by a painful season-ending rally.
Johannesburg-Lewiston rallied for two runs in the top of the seventh inning sneak past the Vikings, 3-2, and to set up a Saturday morning single-elimination game with Rogers City at 10 a.m.
Posen starter Jared Sharpe shook off a rough second inning and got some help from his defense.

Mark Wisniewski led off the bottom of the sixth with a triple over the center fielder’s head and came home two batters later on Chase Schellie’s perfectly executed RBI-bunt single.
With a 2-1 lead in the top of the seventh, Sharpe went to the rubber looking to close out the Cardinals, much the way his older brother did to Joburg one year ago on the same field.
Joburg had the top of their order leading off with the first batter popped out to Sharpe for the first out. It’s those final outs, especially in the tournament, that are difficult to come by.
The next batter hit a grounder to the shortstop that was not handled cleanly and the runner beat the throw at first. Joburg then came up with two consecutive singles. The second tied the game at two runs apiece.
Joburg senior Jacob Smith then stepped to the plate and brought in the go-ahead run with a double deep in the left field corner.
Posen sent the bottom of the order to the plate in the bottom of the seventh and went down in order against Cardinals starter Mason Kortman.
“It was a well-played game on both sides,”

said Posen coach Pat Kowalski. “Jared Sharpe pitched well enough to win, but I guess it was not meant to be.”
Joburg scored the first run of the game as Sharpe struggled in the top of the second. He walked the first two batters of the inning and hit another batter with a curve to load the bases with nobody out.
Sharpe picked up his third strikeout of the game to record the first out, but a bunt single got the runner in from third.
With two out and the bases still loaded, Posen second baseman George Kroll ran down a ball that was heading up the middle. Kroll slid to his knees in the hole, gloved the ball, popped up and ran to second to record the final out and get the Vikings out of a tough early jam.
It was Wisniewski shining on defense the next inning, running down a ball in the gap and holding a runner to a single. He also made a nice running catch on the very next batter.
The Vikings tied the score with Kroll leading off with a line single. Lyrical Mercier sacrificed him to second and Avery Werth reached on a single and advanced Kroll to third. Kowalski then ran a play, sending Werth to second on a steal attempt to provoke a throw. The Joburg catcher threw to second and Kroll broke for home and just beat the return throw with a headfirst slide.
Kroll made two more solid defensive plays. In the top of the fifth, Joburg had runners at first and second when the ball was lined to Sharpe. He threw over to Kroll at second for a bang-bang play. He also made a nice running catch in the top of the seventh to keep the deficit at one.
Posen’s season ends at 13-18, but it is a young squad with a lot of athletes and promise going into the 2018 season.

Cards prepped, ready
for post season
Onaway will be shooting for its first district title since 2013 Saturday afternoon in Hillman.
The Red Birds play in the second game of the 2017 tournament and get the hosts, who are the defending title holders.
Onaway tuned up with doubleheaders against Kalkaska and Newberry in the final week of the regular season. They swept Newberry Tuesday and split with Kalkaska last week.
“The way we are playing right now, I am confident,” said Onaway coach Mike Crull. The coach believes the Cards have a chance to win any time ace Trevor Wregglesworth goes to the mound.
“Obviously, I like our chances with him on the mound,” said Crull. “Offensively, we have faced some pretty good pitchers and hit them, and hit them pretty good.”
Crull said the defense has been playing better and the roster of second starters has improved throughout the season.
Onaway defeated Kalkaska in the first game. 12-7. Gavin Fenstermaker had only one inning of pitching experience during the season, but got the call as a starter and won it. He pitched five and one-third innings, before Crull brought in Jason Smith to close it out.
Kalkaska had some flame throwers, but the Cardinals were knocking the ball all over.
Nick Byrne was 3-for-3, including a double and scored three runs. Wregglesworth went 3-for-4 with two runs scored. He had a double and two RBI.
Josiah Crawford went 2-for-4 with two RBI, three stolen bases and two runs scored. Gavin Fenstermaker had a couple of hits and drove in two. Lucas Tollini had a double among two hits.
“Everyone was pounding the ball,” said Crull. “We had five doubles in the game.”
The Cards needed a little more offense in a 3-2 game two loss. They were leading 2-0 going into the fifth. Cody Neelis pitched well in the loss.
Crull commended the defense and said it has been solid in the last two weeks.
Wregglesworth fired a no-hitter in game one Tuesday against Newberry.
“The defense behind him was making a ton of

plays,” said Crull. Wregglesworth struck out six in the 4-0 victory. At the plate, he was 2-for-2 with two stolen bases. Jeremiah Crawford was 2-for-2 with three stolen bases.
Onaway won the second 13-4 with Gavin Fenstermaker getting the win. His teammates staked him to a 13-0 lead before he ran out of gas.  Tollini was 3-for-4 with three runs scored and three stolen bases. Wregglesworth had three hits and three RBI.
Josiah Crawford 2-for-3 with two runs scored, two walks and four stolen bases.
Byrne and DJ Fenstermaker both knocked in two runs. The Cards finished the regular season 18-13-1.

Hurons tune up for districts by pounding WP
Rogers City swept a pair from Whittemore-Prescott Tuesday in its last game before district tournament play.
The Hurons pounded Whittemore-Prescott 20-8 in the first game led by three hits from senior center fielder Brendan Koss. Kaleb Budnick, Andrew Radke, Jacob Hein and Tristan Baller each had two hits as the Hurons had a 15-hit attack. Rogers City scored eight runs in the second inning and seven runs in the sixth to highlight the win.
Alex Altman worked the first three innings, allowing four hits without a walk or a strikeout. Budnick finished the final three innings, allowing 10 hits and five earned runs with two strikeouts.
Altman allowed six hits in five innings in a 14-1 win in game two at Whittemore. He struck out five without walking a batter.
Matt Altman and Jacob Hilla each had two hits and three RBI as the Hurons banged out 10 hits. Budnick and Radke each had two hits in the win.
Last Saturday, the Hurons won one and lost two in the Ogemaw Heights tournament. The first game went to host Ogemaw, 15-1. Rogers City led 1-0 after its first at-bat before Ogemaw exploded. Budnick led off the game with a walk and scored on Hein’s sacrifice fly to give Rogers City a brief lead. The Hurons managed only two hits in the game.
Ogemaw scored six in the first, four in the second, three in the third and two more in the fourth inning. Hein started and got relief help from Griffin Bredow, up from the junior varsity for the game.
The Hurons suffered a tough loss to Elkton-Pigeon-Bayport in the second of three Saturday games. Leading 2-0 heading into the last inning, the Hurons allowed three runs to lose 3-2.
In the first inning Radke was safe on an error, stole second base and later scored on a balk for the Hurons’ first run. He added a double later in the game. Deuce Tulgestka had two hits including a double.
Alex Altman went all seven innings, allowing four hits while striking out two. Uncharacteristically, he walked two and hit two batters with a pitch.
The Hurons took a 4-1 win over Tawas City to cap the day and earn a win on the mound for Hilla. He pitched four innings, allowing one earned run on three hits and three walks while striking out a batter.
Rogers City scored two runs in the first and two more in the second inning. Koss walked three times and stole three bases while Tulgestka had a single, double and an RBI. Matt Altman had a single and a double while Radke added a double and scored a run.
Coach Matt Bredow is pleased with the way the defense has been playing lately, especially singling out the play of outfielders Matt Altman in left field, Brendan Koss in center field and right fielder Baller.
Rogers City (18-11) now faces Johannesburg-Lewiston in the Hillman districts Saturday at 10 a.m.
“I’m very pleased with where we’re at going into the districts. They guys have brought it all together, pitching, hitting and defense. There playing the game the way it was meant to be played, the Huron way,” coach Bredow said.