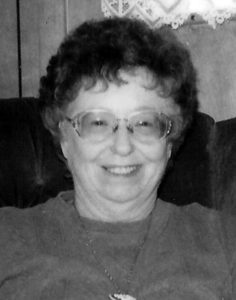 The daughter of Lloyd and Naomi (Brown) Hart, she was born February 13, 1937 and raised on a dairy farm in Waverly Township. She graduated from Onaway High School and worked as a beautician for many years before moving to Arizona. While working as a teacher’s assistant in Yuma, she began taking college courses. Pat eventually earned two master’s degrees in education from Northern Arizona University and became a kindergarten teacher. In time, Pat returned home to her roots in northern Michigan where she married Robert Bobola January 1, 2000.

Growing up on a farm and having horses when she lived in Arizona, Pat always had a great love and appreciation for these beautiful animals.  She loved butterflies, reading a good book, and watching the Detroit Tigers.

Fun-loving and happy, she loved to dance, make people laugh, and gather around the table for a game of cards.  Pat was quite artistic with a talent for drawing and painting, but her greatest passion was for her family. Selfless and caring, she put her family above all.

When her children were small she was a den mother for Cub Scouts and Boy Scouts as well as being their Sunday schoolteacher. As they grew older she was supportive and loving.

Pat’s smile, laugh and love for family will be sadly missed and fondly remembered.

; nine grandchildren; and numerous great-grandchildren. Pat also leaves her sisters, Charlotte (Terry) Riley of Casa Grande, Arizona, Leota “Boots” (Richard) Wregglesworth of Onaway and Leona “Bobbie” Bush of Brutus; as well as many nieces and nephews. Pat was preceded in death by her husband, Bob Bobola; and her parents.

The Rev. James Brabson officiated. Those planning an expression of sympathy please consider a donation in memory of Pat to Hancock Haven or North Country Baptist Church.