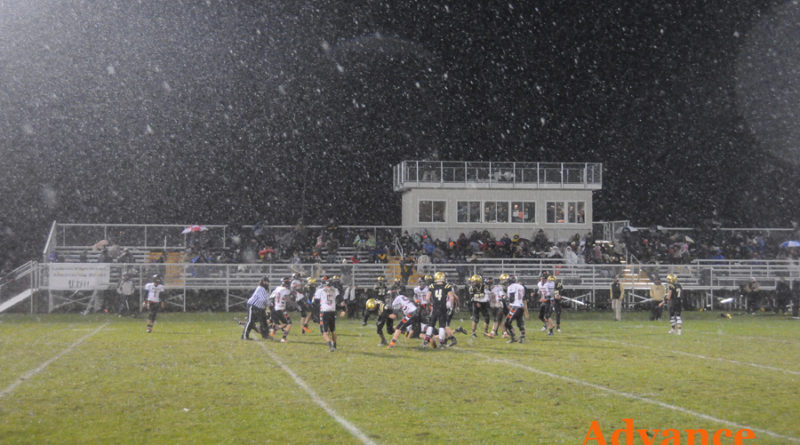 Next, the team is looking to put itself into position for hosting a playoff game for the first time since 2007. Rogers City has not won a home playoff game since a 38-18 win over Mio in 2001, a span of years longer than most of the players have been alive.

FRIDAY IN snowy St. Ignace, the Hurons spoiled homecoming night for the Saints by squashing a potential go-ahead drive and pulling off one of the longest runs in Huron football history.

“We have had a lot of homecomings wrecked for us in past years, so the mentality for those guys was they were sick of it. They wanted to be the one wrecking someone else’s homecoming,” said Huron coach Jesse Fenstermaker.

First, the Hurons got on the scoreboard on their first possession using just five plays to cover 76 yards. The drive started with a 32-yard run from Kaleb Budnick and ended with a 32-yard touchdown run from Michael Karsten. Rogers City led 6-0 with 10:12 left in the first quarter.

With sheets of fine snow blowing in from the north end of the field, both teams struggled with their passing games while keeping most running plays heading between the tackles. Rogers City rushed 35 times for 335 yards while St. Ignace had 49 rushing plays good for 272 yards.

The Saints connected on just 2-of-8 passing attempts for four yards. That included a pass that went for a 10-yard loss, after the Saints’ quarterback scrambled backwards to avoid a big rush.

Rogers City didn’t fare much better in the passing game, notching only five yards in the air on two receptions by Ethan Hincka and J.D. Ellenberger. But the Huron rushing game came up with big plays when needed.

THE SAINTS tied the game on a drive that started with 41 seconds left in the first quarter and ended with 8:30 left in the second. Most of the plays came with runs up the middle using deception to keep the Hurons off-guard as field conditions continued to erode.

A Huron fumble gave the ball to the Saints on the Rogers City 38 three plays into the ensuing drive. But as has often been the case in this magical season, the Huron defense came up with a turnover as Karsten, playing left cornerback jumped high to pick off a pass inside the Hurons’ 20 and returned it to the 40.

On their next drive, the Saints again had a pass picked off. This time Ellenberger stepped in front of a pass at the Hurons’ 14 with just 43 seconds left before halftime.

The teams traded punts throughout the second half when Rogers City took over after a punt to its own 14 with 10:22 left in the game. Quarterback Caleb Bade went around right end for 4 yards. On the next play he went five yards to set up third-and-one. Ellenberger carried around right tackle for 19 yards to the Huron 41. Then the drive stalled.

Facing fourth-and-six at the Huron 45 with 7:10 left on the clock, Fenstermaker decided to roll the dice and go for it. Bade rolled right and launched a long pass attempt to Hincka, but a defender tipped the ball away from Hincka, and the Hurons lost the ball on downs.

Now St Ignace had a short field to drive for a potential winning score. They ran seven running plays up the middle, bullying their way to three first downs. With first-and-goal at the Hurons’ five, Budnick’s tackle stopped the runner at the Huron 2. The Saint’s right tackle jumped before the snap on the next play, moving the ball back to the 7. Another run pushed it to the 4 for third and goal.

On the next play junior nose tackle Ceejay Bixby beat his man and burst into the backfield, stripping the ball and falling on it at the 5. The scoreboard clock showed 2:21 left in the fourth quarter after the big turnover.

“That play was all Ceejay Bixby. We asked for somebody to step up and take the ball away and he actually stepped into the pile, grabbed the ball and ripped it out of the kid’s arms,” Fenstermaker said.

The Hurons had dodged a bullet, and seemed content to settle for a chance at an overtime game. But this team, that has made so many big plays this season, would not settle for overtime.

ON THE first play from scrimmage, Budnick lined up behind Bade in the backfield and Ellenberger came in motion right from the left wing. Budnick took the handoff going left, shook off a would-be tackler three yards behind the line of scrimmage, got key blocks from Grant Ryan and Griffin Bredow on the left side and busted the play outside.

He made a move on a diving attempt from the left cornerback, who raced to cut off Budnick at midfield, then went untouched the rest of the way. Bade ran in the conversion and suddenly, what looked like a heartbreaking loss turned into a heart attack win.

ight time and have a kid that wanted it. At that moment he was about the only guy showing any emotion. The guys just were not amped up enough,” Fenstermaker said.

Budnick had a great game on both sides of the ball, making 15 tackles while seldom leaving the field of play for a breather.

St. Ignace failed to get a first down on the ensuing drive and Rogers City came away with its seventh win of the season.

Rogers City hosts Manton Friday in the homecoming game. They then await the MHSAA selection show to find out who and where they will play for the first round of the playoffs.