Christina “Chris” Anna VanHoorne, 82, of Sparta, formerly of Onaway, died, surrounded by her children and grandchildren, at Mercy Health St. Mary’s in Grand Rapids Thursday, November 15, 2018. The daughter of Albert Friedrich Netter and Frieda Hinterstein, Christina was born in Hochstudt, Germany August 30, 1936.  Christina came to the United States in 1961 when she married Lorne Berry.  She later married Albert VanHoorne in 1984.  He precedes Christina in death. 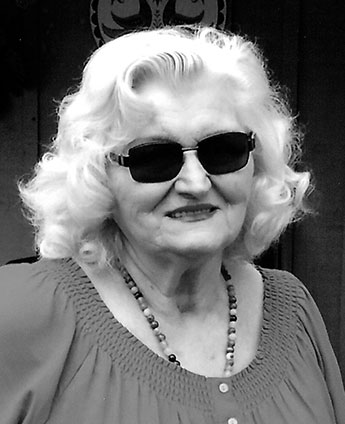 On a single day in 1970, while seven months pregnant, Christina obtained her U.S. Citizenship, her driver’s license, and was confirmed in the Catholic Church. She was a proud citizen of the United States but also maintained her German heritage.  She was a wonderful cook of German cuisine, loved German folk music, and kept in touch with family and friends in Germany with frequent letters and phone calls. She shared with her children stories of her childhood in Germany during World War II and how as young girl of 14 years old she went to work at a porcelain factory to help support her family.

Outgoing and social, Christina loved to travel and meet new people.  She enjoyed getting to know people and where they were from. A classy lady, she always looked her best when she went out and was known for her signature fuschia colored lipstick.  She loved 1950s music, meeting her friends for coffee, and playing bingo, but her greatest joy came from her family. Nothing made Christina happier than having her children and grandchildren with her.  She enjoyed their visits, loved hearing about their day, and especially enjoyed their family tradition of having a cup of German coffee together in the morning.

A truly unforgettable person, Christina impacted every person she met and was well-known wherever she lived.  She had a wonderful sense of humor and when asked about her German accent, she would reply, “You mean my accident?” Christina always spoke the truth and when asked for her opinion would be honest, sometimes too honest; although most people did appreciate her candor.  Very kind, with a pure heart, Christina would give the shirt off her back to help someone.  Determined, nurturing, and without much means, she raised seven healthy, successful children. Despite not having much, Chris made sure her children had plenty to eat and were well-dressed. Lovingly called “Oma” by her grandchildren and “Mutti” by her children, Christina’s children loved and respected her beyond measure.  They truly adored their mother.

Chris cherished her family and friends, always thanked God for her many blessings, especially her children, and never took a day for granted.

Christina will be missed by her sons, Allan Berry of Terre Haute, Indiana, Malo (Marelyn) Berry of Belleville and Scott and Ryan Berry, both of Onaway; daughters, Gale (Scott) Parr of Onaway, Colleen (Roger) Sedell of Vancouver, Washington, and Elaine (Mike) Koren of Sparta; 16 grandchildren; and nine great-grandchildren; as well as a great-granddaughter who has not yet been born who will be named Christina.  She also leaves her sister, Margot Popperl of Uttenreuth, Germany; many family members in Germany; and special friends, Jan Berry, Amy Shiero and Thelma Go

nzales, who all cherished Christina’s friendship.

Christina was preceded in death by her son, Raymond Berry; her husband, Albert VanHoorne; a sister, Elfrieda Harris; a brother, Gerhardt Stingel; and her parents.

Visitation will be held at the Chagnon Funeral Home Sunday, November 25, from 4 – 8 p.m. with a rosary service beginning at 7 p.m.  The funeral Mass will be at St. Paul Catholic Church Monday, November 26, at 11 a.m.  The Rev. Patrick Maher will officiate.

Christina’s final resting place will be at St. Paul Catholic Cemetery in Onaway.