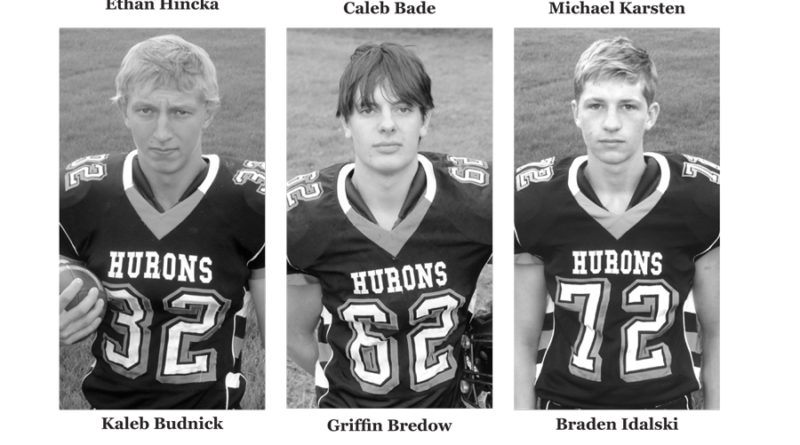 Players from the Rogers City Hurons’ football playoff team earned honors on the North Star League all-conference squad.
One player earned first-team status on both offense and defense. Ethan Hincka was second on the team with 94 tackles, including an 18-tackle performance in the Whittemore-Prescott game.
The senior earned first team at linebacker. He also earned first team as an end, catching 13 passes for 290 yards for an average of 22.9 yards-per-catch.
Caleb Bade, another senior, earned first team as a cornerback and second team at quarterback. As a passer he connected on 29-of-80 passing attempts for 622 yards. He also rushed for 209 yards on 48 carries.
Running back Michael Karsten made the first team. He rushed for 535 yards on 90 carries (5.9 average) in his senior season. His top game was a 124-yard performance in a win over Alcona in week six.
Senior linebacker Kaleb Budnick earned first-team status. He led the team with 127 tackles, getting double-digit tackle numbers in eight of the team’s 10 games. He had 17 tackles in the season’s first game against Whittemore-Prescott.
Griffin Bredow anchored the offensive line at center. He earned first team for his outstanding season in the middle.
Those making the second team were senior lineman Braden Idalski on offense, junior linebacker Lewis Fleming, junior defensive back J.D. Ellenberger and junior defensive back Jaylen Fleming.
Coach Jesse Fenstermaker led the team to the playoffs with an 8-2 record that included wins against Whittemore-Prescott, Mio, Alcona, St. Ignace, Sault Ste. Marie, Manton, Mancelona and Tawas City.