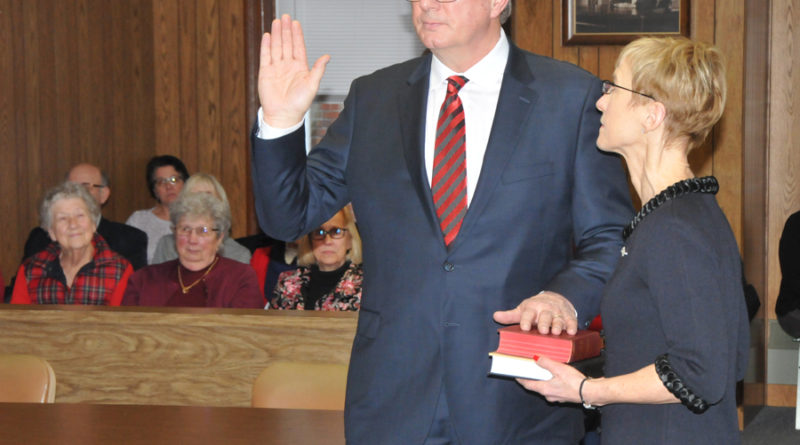 by Peter Jakey–Managing Editor
The son of a Great Lakes captain was sworn in as Presque Isle County probate judge in front of a proud family, several friends and supporters, as well as courthouse employees from all departments.
Outgoing Judge Donald J. McLennan presided over the investiture ceremony conducted last Friday in the 53rd Circuit Court room.
Erik J. Stone raised his right hand with his wife Meg at his side for the administering of the oath.
Stone, who was duly elected by voters in Presque Isle County last November, affirmed that he will uphold the Constitutions of the United States and Michigan.
“And I will faithfully discharge the duties of the office of judge of probate,” said Stone, repeating McLennan’s words. “According to the best of my abilities, so help me, God.”
McLennan then had Stone sign an oath at the bench.
“The oath having been signed in my presence, I am subscribing to it. He does take over Jan. 1, 2019 at noon,” said McLennan, who smacked the gavel. That was followed by a long round of applause.
“Thank you all for coming,” said Stone, offering remarks in the packed courtroom. “I thank you for allowing me the honor of this office. I will faithfully abide by that oath I just took. Thank you, I look forward to seeing you all around town.”
His mother Marilyn Stone was beaming in the front row.
“I am very proud of him,” said Marilyn Stone afterward. “His dad (Paul Stone) would have been so proud.”
Marilyn Stone said one of her son’s best traits is his empathy for others.
Before being sworn in, McLennan gave the incoming judge some words of wisdom, or a judge to judge-elect pep talk.
“A judge is there to do justice, Mr. Stone,” said McLennan. “I guess I can still call you that today. And to do justice, that does not mean you do what might be the most popular thing on that particular day.”
McLennan preached patience, brevity, the need for moral courage to do the right thing and the importance of keeping an open mind.
“Human beings often have pre

conceived notions, and if you are going to be a judge…you cannot come in with a preconceived notion,” said McLennan.
“You have to set it aside, even if at first blush something looks like it might be so. After you receive arguments and evidence, maybe so isn’t what it is, maybe it’s such. So it is critical, to be fair, that you have an open mind.”
McLennan said he would leave a book about the qualities of a judge on the desk in the judge’s chambers.
While he officially does not become Judge Stone until Jan. 1, 2019 he still wants to be referred to as Erik outside of the courthouse.

Cheboygan native is
Pavlich’s replacement
Gov. Rick Snyder appointed Aaron Gauthier, of Cheboygan, to the 53rd Circuit Court in Cheboygan and Presque Isle Counties.
“Aaron has a wide range of legal experience and a strong reputation of integrity,” Snyder said.  “I am confident that he will serve the residents of Cheboygan and Presque Isle counties well as judge on the circuit bench.”
Gauthier currently works as a commissioner for the Michigan Supreme Court focusing on legal analysis, research and writing. Previously, he worked as a general practitioner handling civil and criminal litigation, including appeals, and as an assistant prosecutor for Cheboygan County where he litigated felony and misdemeanor cases.
Gauthier also has worked as a judicial law clerk at the Court of Appeals and taught an advanced writing course at Cooley Law School. Gauthier earned a bachelor’s degree and a master’s degree from Notre Dame and a law degree from Cooley Law School.
Gauthier fills the vacancy created by the retirement of Judge Scott Pavlich. He must seek election in November 2020 for a full term.