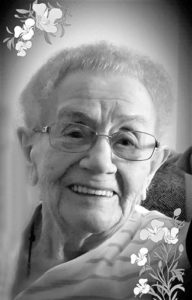 She was born August 14, 1920 in Belknap Township to August and Rose Kowalski. Martha was the last of five children. After her marriage to Hazen in 1940, she moved to Wayne County for five years. While there, she worked as a Rosie the Riveter during World War II at the Willow Run Bomber Plant in southern Michigan. Hazen and Martha moved back to Rogers City in 1945 where she remained a homemaker and raised their four children. After the graduation of her youngest child, Martha worked at the SirVis Dry Cleaners for 10 years. She than became a senior companion for NEMSCA for 31 years. Working for NEMSCA brought her great joy and a reason for being. Martha worked as a senior companion until her death. One of Martha’s proudest accomplishments was obtaining her high school diploma at age 62. Martha was an avid bowler for 30 years and was inducted into the Bowler Hall of Fame in Rogers City at age 83.

She is survived by her children, Pamela (Jerry) Young of Freeland, Peggy Robin of Alpena and J

Martha was preceded in death by her husband, Hazen; her parents; a daughter, Betty Lou Elowski; a son-in-law, Edward; a grandson, Steven; and four siblings.

Visitation was at the Beck Funeral Home Sunday, December 16, where the rosary was recited followed by the parish wake service. Visitation resumed Monday at St. Ignatius Catholic Church until time of Mass with the Rev. Rolando Silva officiating.

Interment will take place at St. Dominic Catholic Cemetery in the spring. Memorial may be given to St. Jude in memory of Martha Smith.
Online condolences may be addressed through www.beckfuneralhome.org.