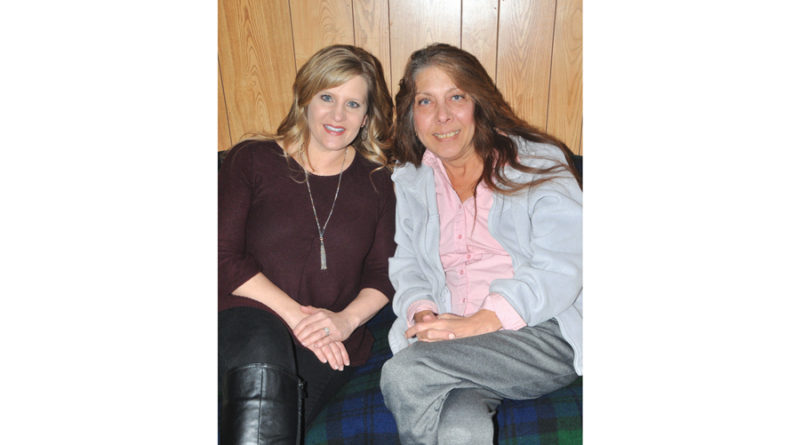 There have been some positive developments involving Sherri Robertson of Rogers City, who is in a fight against time.
The Rogers City woman wants to attend the wedding of her only child Oct. 19 in Zeeland, but is in need of a new kidney.
Robertson’s plight was chronicled in the Presque Isle County Advance before Thanksgiving 2018 and read by Jennifer Warwick of Rogers City, who can relate to Sherri’s situation. She, too, has a daughter getting married this year.
“It made me think, what if it was me. If I wasn’t going to be able to see my daughter Brookelyn get married, I would hope that somebody would step up and donate their kidney to me,” said Jennifer, who is not only prepared to donate one of her kidneys, but is a confirmed match.
Jennifer emailed the Robertsons shortly after the original article was published and the two met at then Karsten’s Luncheonette to meet for the first time and talk about what can be done to prolong Sherri’s life.
Kidney failure is hereditary in Sherri’s family. She lost her grandmother at 52 and her mother received a transplant at 50.
“If I cannot be at that wedding, that breaks me,” said Sherri.
When Sherri and her daughter went dress shopping recently, emotions got the best of her.
“I thought I had everything under control,” said Sherri. “When I saw her in her gown, I started to cry, and I cried, and I cried. All the way home, I cried.”
Since the article was first published, Sherri had an almost weeklong stay in the hospital.
“Dec. 21, 2018 the winter solstice, I almost checked out,” explained Sherri. “It was closer than I wanted it to be.”
Sherri started feeling weaker shortly after Thanksgiving, but was moving forward with plans to have her daughter and other guests over for Christmas.
But when Sherri could not stand up or walk, her husband called for an ambulance.
“From what they can surmise, me being seven months off dialysis, my kidneys totally quit,” she said. “I had a function of 4 percent.” There also was some internal bleeding and the loss of three units of blood.
“I had no blood in my body,” said Sherri. “I was upset, because I knew if I took the transfusion, it would put me 90 days out for any chance of a transplant.”
The new blood reset the transplant clock, but Sherri’s health has improved with 8 percent function. She also is back on dialysis three times a week in Alpena. It’s part of the required steps that Sherri needs to go through before doctors will give the green light.
For Jennifer, she went to her husband of nearly 25 years, Jamyme, seeking his approval first. He wanted to make sure it is what she wants to do.
“Absolutely, I think it is the right thing to do,” said Jennifer. “To extend her quality of life and have her not go through all the pain of dialysis. It makes me so joyful to think that can happen for her.”
Jennifer’s two daughters, Brookleyn and Brianne are on board as well.
“They are so inspired by it, they want to do things for other people,” said Jennifer. “My sister, Rebecca, right away that week when I told her, she went out and got tested for bone marrow to be on the bone registry. There are so many people out there who we can be helping, and we should be helping them.”
Jennifer is a devout Christian believer, who is at peace with the decision.
“We are supposed to love our neighbors, and what a better way to show love to our neighbors by the giving of ourselves,” said Jennifer. “I can pray for her and do things for her, but what an amazing blessing to be able to be used by God to answer somebody’s prayer. It’s definitely a God thing.”
When the 90 days is up in March, Sherri will undergo further testing to be re-typed. “They know I will still be A, but they want to check the other two markers,” she said. That could take two more months.
Jennifer would then complete her second phase of testing.
“From there, we will travel to Detroit to meet the surgeons,” Sherri added. That’s when they both will find out when or if there is going to be a transplant date. It could happen in July or August.
In the meantime, both ladies are worried about temporal things like dresses for the weddings. Sherri still needs to find one, while Jennifer ordered hers and is hopeful it fits.
The newfound friends also are on each other’s invitation list and will be further praying there is no change.