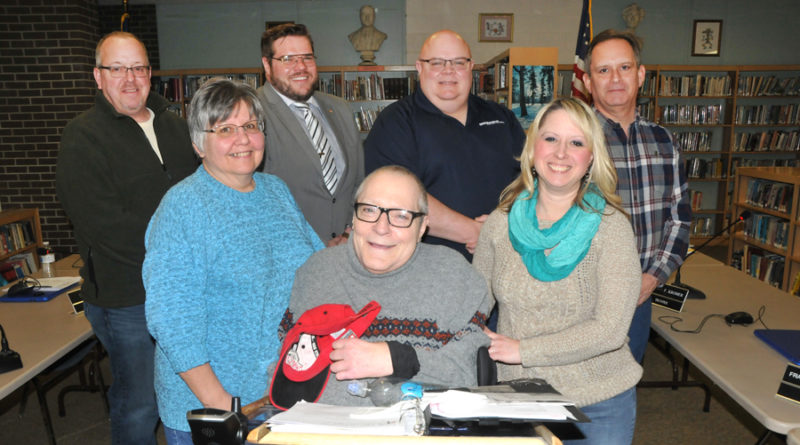 by Peter Jakey–Managing Editor
There was a leadership change at Monday’s Rogers City Area Schools (RCAS) board of education meeting with Devin Pommerenke elected as board president.
At 25, if Pommerenke is not the youngest board president in Michigan, it certainly was a fast ascent up.
In 2011, Pommerenke received his high school diploma on the Rogers City High School stage. In June, he’ll be handing them out. He received a unanimous vote as the only nominee. And, he’s only been on the board for three years.
Pommerenke thanked the rest of the board for the confidence it instilled in him.
“Our children’s future is important to all of us here,” he said during the meeting. “If it wasn’t, we simply would not be here. I’m excited for what the future holds.”
After the meeting, Pommerenke said, “I’m not afraid of big responsibilities, or big jobs, and I’m not afraid of this because I have a really good board and administrators around me.”
Pommerenke succeeds Ivy Cook, who held the post for the last two years, 2017 and 2018. She was elected board treasurer.
Monday, two new members, Diane Schultz and the Rev. Dr. Greg Zurakowski, were brought into the fold. RCAS administrative assistant Victoria Paull administered the oath of office. Both said the pledge together while holding their right hands up.
“It’s been a privilege being elected, and I think all of us have an obligation to serve our communities in some way,” said Zurakowski, a co-pastor of Westminster Presbyterian Church. “I am looking forward to advancing Rogers City Area Schools.” He also is interested in seeing much needed improvements made at the track and field area.
Schultz is a former district employee, who ran the kitchen and has grandchildren that are students.
“I love being on the board and I hope that I can make a difference,” said Schultz. “I’m here for the kids and want the best for the kids.”
Zurakowski was elected board secretary and Schultz, assistant treasurer/secretary.
Deedra Haselhuhn and Cory Budnick decided to not seek re-election.
Larry Budnick was elected vice president in a close 4-3 vote over Frank Andrews, who was the vice president last year.
There were no changes to the meeting times, but Pommerenke announced that future sessions would be conducted in the high school meeting room and no longer in the media center/library.
During the last quarter-of-a-century, meetings have been conducted in the library and at the Grambau Education Center.
In other business, Paul Przybyla was hired as a new bus driver following the resignation of Samuel Reeves.
Tammy Budnick was appointed to the parent advisory board.