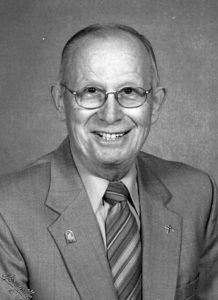 He was born September 6, 1932 in Belknap Township to Walter and Lillian (Bade) Hempel.

Eldon served in the United States Army, deployed in Germany during the Korean Conflict. He was tank pilot. Eldon worked for Mulvena Trucking for 15 years in the Alpena and Saginaw areas before marrying Ann Claus September 19, 1964 at St. Michael Lutheran Church. He was also an AAL insurance rep, retiring in 1987. He was a certified lay minister through the Lutheran Church, filling pulpits in northern Michigan and Upper Peninsula from Newberry east. Eldon enjoyed coin collecting, hunting, fishing and taking care of his bees.

Eldon loved spending time his family and especially his granddaughters.

He is preceded in death by his parents; a son, Chris Hempel; and a brother, Walter Jr.

Friends may visit at the Beck Funeral Home today (Thursday, January 3) from 4 till 8 pm. with prayer service at 7 p.m. Visitation will resume Friday at St. Michael Lutheran Church from 10 a.m. until time of his funeral at 11 a.m. with the Rev. Paul Boerger officiating. The Rogers City Veterans of Foreign Wars Post 607 will accord military honors following the service.

Interment will take place in the spring at St. Michael Lutheran Cemetery. Memorials may be given to McLaren Hospice in memory of Eldon Hempel. Arrangements in care of the Beck Funeral Home.
Online condolences may be addressed through www.beckfuneralhome.org.