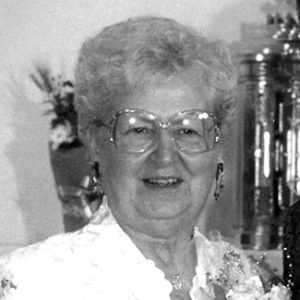 She was born in Rogers City August 12, 1923 to Alex and Constance Rybicki.  She was raised on a small farm in Hagensville with seven siblings. Being the second oldest, she felt she was a second mother to her younger sisters and there was a great loving bond between all seven girls and their brother. Family was important to her throughout her life.  It was a party when even two siblings got together. Dorothy has many photos of all eight of them together and she was a little sad when one was missing from a gathering.

In her late teens she moved to Detroit to work and became a Rosie the Riveter along with many other factory jobs brought about by World War II. She was especially proud of working in the quality control room of a war parts’ plant.  As the war ended, Dorothy met the love of her life, Edmond “Ed” Kapa, and they were married September 28, 1946 at St. Dominic Parish in Metz and they spent 70 fun-filled years together. They began their family in Detroit, brought their children up in Rogers City, moved to Alpena and finally settled on Grand Lake for the summers and spent winters in Bullhead City.

Dorothy loved to laugh and talk while playing card games and taught her children early to play poker and pinochle.  She liked bingo and loved going to the casino.  She fished with Ed but claimed to be the most unlucky fisherman in the world but sure could cook up a good batch of fish and frog legs usually supplied by her son.  She was proud to sew frilly dresses for her daughters and granddaughters and took pleasure in cooking for her grandsons. Dorothy loved her grandchildren and great-grandchildren and made each one feel they were her favorite. She will be greatly missed.

Visitation was at McWilliams Funeral Home in Posen Tuesday, February 5, 2019. Visitation resumed Wednesday at St. Casimir Catholic Church until the Mass of Christian Burial. Interment will be in the Spring. Because of the wonderful care and comfort provided by nurses and caregivers Dorothy requested memorials be given to Hospice of Michigan. Online condolences can be registered at www.mcwilliamsfh.com.