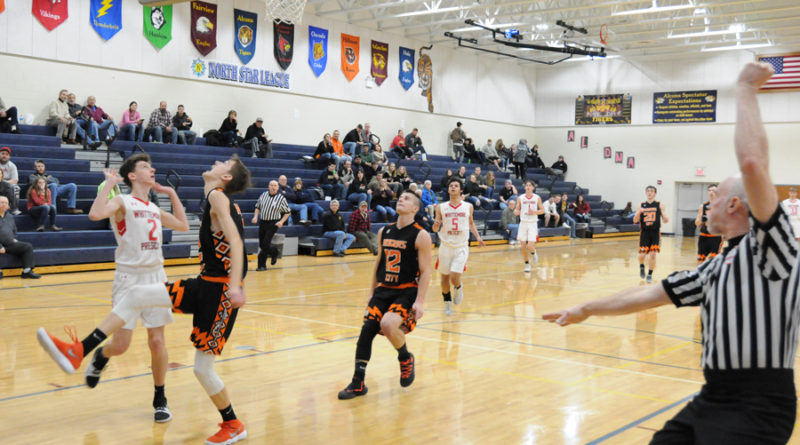 Rogers City will  face Johannesburg-Lewiston Wednesday at 7:30 p.m. in the district basketball tournament after defeating a stubborn Whittemore-Prescott (W-P) Cardinals squad Monday, 62-55. The winner of Wednesday’s game will play in the district finals Friday at 7 p.m. at Alcona High School.

The Hurons overcame a sluggish start and the super efforts of Cardinals’ guard Dana Thorson, who pumped in 33 points. Thorson drained six 3-pointers from all over and hit a variety of driving shots to keep the Cardinals in the game.

W-P went out to a 9-2 lead after Thorson’s 3-pointer from the top of the key. Hurons’ coach Matt Ponik called timeout and the Hurons responded with a 10-3 rally to tie the game at 12-12 after the end of the first period.

The lead changed hands four times in the second period as W-P led by as many as seven points at 27-20 with 1:54 left in the first half. Matt Newhouse nailed a key 3-pointer from the right wing as time expired to make the score 29-27 in favor of W-P.

The Hurons went to work in the paint as the second half opened. Buckets by Ethan Hincka, a putback by Kaleb Budnick, and a bucket from Newhouse gave the Hurons a 33-27 lead. W-P did not make a field goal until the 1:36 mark of the third quarter.

But W-P would not go away. A 3-pointer by Thorson tied the game at 37-37 with 1:01 left in the third quarter. A cutting J.D. Ellenberger had a finger-roll basket before Nick Freel made a big play. Freel stole a pass near half-court, dribbled down the right side, hit a layup while drawing the foul. He made the free throw giving the Hurons a 42-37 lead heading into the fourth quarter.

Two free throws by Budnick, who led the team in scoring with 16 points, extended the lead to 51-44. A 6-2 W-P run made it 56-55 with 2:21 left in regulation. After each team missed shots Luke Tulgestke’s 3-pointer from the top and Ellenberger’s three free throws ended the Cardinals’ season.

“We did not play our style of basketball and that almost cost us the game. I think our effort has to be better, especially in the playoffs. We shouldn’t be making the turnovers we are making,” Ponik said.

Oscoda defeated Alcona 50-30 in the opening game of the district tournament.

IN THE last regular-season ga

me Feb. 22, Rogers City sent a message to the undefeated Oscoda Owls. The Hurons went punch-for-punch with the Owls. A 3-pointer by Hincka and a driving shot by Ellenberger gave Rogers City a 7-5 lead with 1:14 left in the first quarter.

A 3-pointer from the win by Freel extended the lead to 12-7 before the Owls went on a 13-0 run over a three-minute span in the second quarter. Oscoda led 25-22 at halftime.

A drive by Hincka made it 25-24 with 6:34 left in the third before the Owls went on an 11-2 run to pull away. Hincka had all six Huron points in the third but Oscoda combined for 16 in the frame.

Hincka led the team with 16 points while Ellenberger added 12. 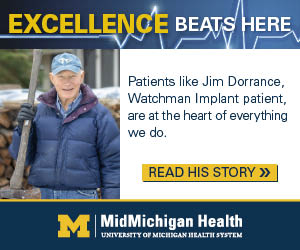