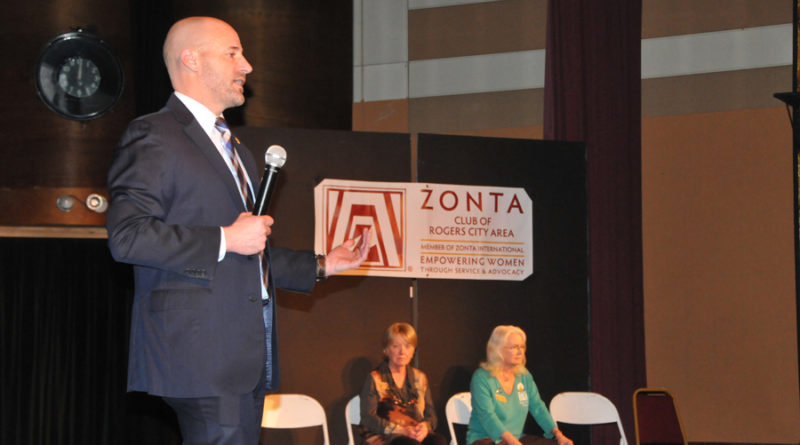 by Peter Jakey–Managing Editor
Members of the Rogers City Area Zonta Club (RCAZC) were overwhelmed with feelings of accomplishment that they could reach so many teenage girls from northeast Michigan to get the message out about human trafficking.
FBI special agent Michael Glennon went before a full Rogers City Theater that was represented by all Presque Isle County schools, as well as the public schools from Montmorency County. There were actually folding chairs set up at the front of the theater to accommodate more.

“I am amazed at how this turned out,” said Jan Pankner, who sat onstage with RCAZC president Marie Lundhein. She added that it exceeded her organization’s expectations. “Our speaker was phenomenal.”
“We feel that these topics, are of utmost importance in today’s computerized society to protect you and prepare you for these dangers,” said Lundhein. “And today we have someone who is eminently qualified to do that.”
Glennon, who has talked on the subject in Alpena and Traverse City, drove from downtown Detroit.
“I think, truly, we were able to get a better understanding of what child enticement and exploitation is,” said Glennon, when the program concluded.
One of the key messages was, “If (young girls) fall prey to circumstances, they are victims and that they should reach out and get help. They are not in trouble and that we are going to help them.”
Glennon told attendees that he did not know much about human trafficking when he took the job with the FBI. He thought it was crime involving someone being taken and held captive.
“That logic really changed over the course of time,” said Glennon, pacing back and forth on the stage. He told of an investigation where a number of young ladies were brought into the country from former Soviet Union countries, under the auspice that they would be getting various jobs.
“They were not allowed to talk to their families and were forced to work in strip clubs and provide sexual acts in exchange for money, six days a week, 14 hours per day,” said Glennon. “There were some pretty dire situations. One particular girl tried to leave. She found a boyfriend and tried to run off. They actually bombed his car.”

Glennon said it was an eye-opener to learn that this is the way people were treated.
Furthermore, he did not realize how many “kids” were involved in juvenile sex trafficking in the sex trade industry, said Glennon.
While talking about smartphones, Glennon said a person has more technology in his or her hand than NASA had in 1969 when man walked on the moon. That led into a discussion about online enticement.
“Most kids are on their phone for three to four hours a day,” he said. “There are a number of groups out there that are out there acting like teen boys and teen girls. They are going to hunt you. They work in groups of eight to 14 guys. Each has a specific role.”
The first is the hunter, who goes out across all social media.
“He may tell you he is a classmate of yours and got locked out or hacked from his account and needs access to your account,” said Glennon.
The gatherers then, as soon as someone is on the hook, are going to research potential victims. “They are going to know what school you go to and what activities you are in…they are going to look at everyone of your photos and go through them and look in the background…”
The researchers then are going to compile a list of friends.
“From there, you are going to get the talkers,” said Glennon. “He will be a really smooth talker, and his whole intent is to get you over to a live-streaming application or venue.
“The goal and intent it to elevate things over the course of time. As it gets there, you will see the other girls expose themselves,” said Glennon. “You might say, ‘this is a cool environment, I’m going to do something too.’
“Once you start to produce and give imagery of yourself in a compromising fashion, those images are going to be captured.”
Glennon said it can lead to threats of releasing the photos to friends.
“You are about 1,000 times more at risk sitting on your couch with your phone in your hand than you would ever be walking through Target or a mall,” Glennon said.
For girls caught in the cycle, 27 percent attempt suicide.
“If you are solicited, talk about it,” he added. “Find someone you trust…you were exploited, someone took advantage of you.”
Glennon said the individuals who do this must be brought to justice.
In another aspect, Glennon said there are about 90 young ladies involved in the sex trafficking in Michigan. There are between 30 and 40 in metro Detroit involved; 20 in Grand Rapids area; and Traverse City about five.
“That number increases during a major event,” he said. “(During) the auto show or World Series, it goes up about 400 percent.”
Glennon also wanted to change the mindset of what a pimp is in the 21st century.
“It could be someone amongst you,” said Glennon. “More recently, I had a case where we had a young lady who had just turned 18 and she was a high school student. She was using Instagram to solicit herself and four of her friends…she was bringing in about $8,000 per month.”
The girls in the audience were encouraged to get involved to stop it.
“You’re not throwing them under the bus,” Glennon said. “You’re potentially saving their lives.”