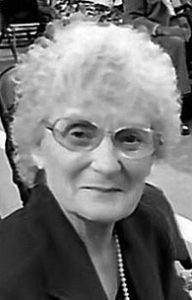 She was born May 25, 1929, in Tower, to Ruben L. and Leola Veihl Styes. She was raised on a farm in rural Michigan. She and Adolph Ganske were married August 16, 1947.  Four children were born to their union, and they had been married 48 years when Adolph passed away November 16, 1995.

Virginia resided most of her life in Michigan.  She was a Jehovah’s Witness since 1962 and is a former member of three congregations in Michigan.  Her children and grandchildren fondly recall Virginia’s strong love and devotion to her family and her dedication to caring for them through homemaking, gardening, canning and quilting.

In 2002, some years after Adolph’s passing, Virginia married married Ray Ganske, who happened to be her husband’s cousin. They lived several years in Maryland and had been married 12

years with he passed away in 2014, which is when Virginia moved to Jackson and resided with her daughter, Susan Tillotson.  She was currently an active member of the Kingdom Hall of Jehovah’s Witness in Jackson.

In addition to Adolph and Ray, she was preceded in death by her parents; and a brother, LeRoy Styes.