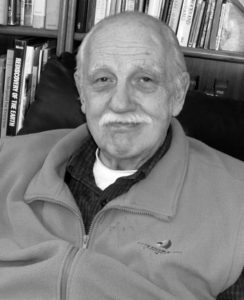 Born in Detroit August 2, 1929 Paul met the love of his life at Albion College.  He was a lifelong member of Sigma Nu Fraternity and received his pharmacy degree from Wayne State University. He and his wife Suzanne raised their family in the Ortonville area. As owner of the pharmacy at Knollwood Clinic in Lapeer, Paul was passionate and dedicated to helping people understand their medications.

Paul and Suzanne loved the Great Lakes and built their retirement home, a lifelong dream, on Lake Huron at 40-Mile Point just below the Straits of Mackinac in 1993. They made many friendships in their new community and Paul continued his pharmacy career

part time in the area until he was 80. He enjoyed brewing beer and cooking for his friends especially during football season.

Paul was preceded in death by a sister; and two brothers.  He is survived by his wife of 67 years, Suzanne; daughters, Nancy (Bill) Schlansky and Jan Darrow (David Pettit); sons, Paul Meinke (Kurt Anderson) and Karl Meinke (Debbie). Five grandchildren, Sarah, Shaina, Erik, Alex and Alexandra; and two great-grandchildren, Joseph and Vivian.  A private celebration of life will be held in Petoskey.