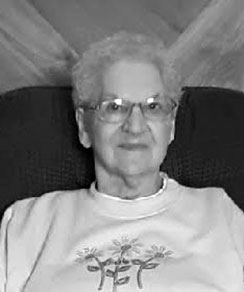 She was born August 5, 1929 in Rogers City to Frank and Cecelia (Metko) Chrzan.

On November 3, 1951 she married Clarence William Curtis at Immanuel Lutheran Church in Moltke. Mrs. Curtis enjoyed baking, cooking, gardening and picking berries; but most of all she loved spending time with her grandchildren and great-grandchildren.

She was preceded in death by her husband, Clarence; daughter, Jane Brown; son-in-law, Ray Karsten; three sisters; and six brothers.

Visitation was at Immanuel Lutheran Church in Moltke Wednesday, July 10 through time of her funeral with the Rev. Phillip Phifer officiating.

Interment followed in the church cemetery.

Memorials may be given to Immanuel Lutheran Church or St. John Radio Ministry in memory of Mrs. Curtis. Arrangements are in care of the Beck Funeral Home. Online condolences may be addressed through www.beckfuneralhome.org.