Kathleen Marie Merrick, 84, of Black Lake, died Monday, July 1, 2019 at The Brook of Cheboygan. Born September 7, 1934, Kathy was the daughter of William J. and Bernice (Eberts) Malay. She married John “Carl” Merrick at St. Elizabeth Catholic Church in Wyandotte October 9, 1954. They made Wyandotte their home until 1971 when they moved to Black Lake where Kathy ran their business, Merrick’s Grocery. With her outgoing personality, Kathy was always very friendly and helpful to her customers.  It was a job that suited her well.  In 1986 they sold the little store on Black Lake and Kathy took a job running the deli at the Cheboygan Kmart store where she worked for 10 years before retiring.

A wonderful wife and loving mother, Kathy also was an excellent homemaker, cook and baker. She enjoyed knitting and was always making a sweater, a blanket or a hat for someone in the family. She loved big family gatherings at the lake, playing cards with her family (especially Tonk), and going on the pontoon boat. Black Lake had a special place in Kathy’s heart. She and Carl enjoyed fishing and working together to have one of the most beautiful yards on the lake.  A fan of the Detroit Lions, and an even bigger fan of the Red Wings, Kathy loved watching football and hockey. Devoted to her faith, Kathy was a longtime member of St. Paul Catholic Church in Onaway. 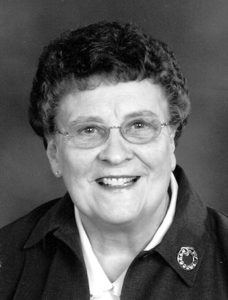 Proud of her children, their accomplishments, and the families they raised, it was quite easy to see how much Kathy loved her family. The ultimate hockey mom, until just a few years ago, she was still attending her adult sons’ hockey games and cheering every time they scored a goal.  Sometimes she was the only person in the stands to watch a men’s league game late on a Sunday night. She treated everyone with love and respect and seemed to connect with everyone she met.  Truly unforgettable, Kathleen Marie Merrick loved well and was well-loved.

Kathy was preceded in death by her husband of nearly 55 years, Carl, March 27, 2009; a daughter, Sue Ziegler, in December of 2015; a brother, John Malay; and a sister, Sally Masserant.

Visitation was Sunday, July 7, at the Chagnon Funeral Home in Onaway with a rosary service that evening. The funeral Mass was at St. Paul Catholic Church Monday with the Rev. Patrick Maher officiating.  Kathy’s final resting place was at St. Paul Cemetery. Those planning an expression of sympathy please consider a donation in memory of Kathy to McLaren Home Care and Hospice, c/o McLaren Northern Michigan Foundation, 360 Connable Ave., Suite 3, Petoskey, MI 49770.