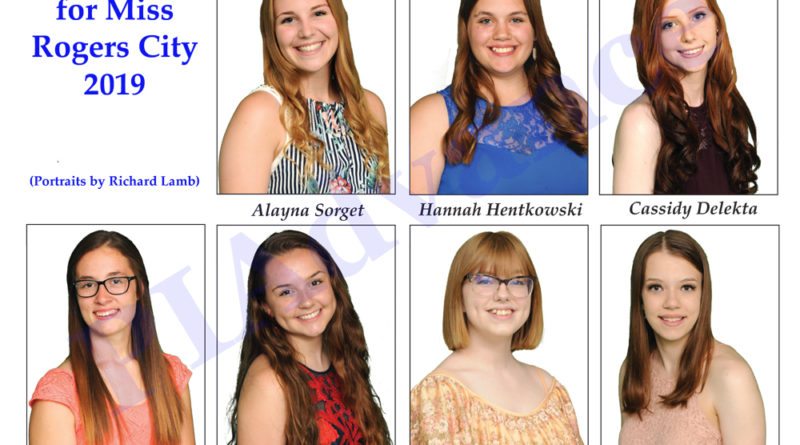 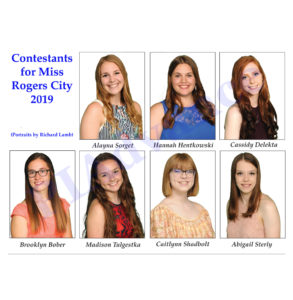 by Richard Lamb–Advance Editor
The days are counting down to the annual Miss Rogers City queen’s pageant set for July 26 at Rogers City High School. This year additional crowns have been added to the event. Both the Miss Rogers City and the Teen Miss pageants will have two queens crowned. One will be named Miss Rogers City and the other Miss Nautical City for the older girls while the younger set will have a Teen Miss Rogers City and a Teen Miss Nautical City.
The idea of the additional title is to potentially draw more contestants in from the county in future years. The Miss Rogers City winner must be from the Rogers City Area School District while the Miss Nautical City could reside anywhere in Presque Isle County. With the dissolution of the Miss Onaway and county fair pageants, the Nautical City queen pageant could provide an opportunity for girls to enter a pageant who might not have that opportunity.
The contestants will by vying for the titles held by Miss Rogers City 2018 Miranda Seiter and Teen Miss Rogers City 2018 Grace LaLonde.
Contestants for the Miss Rogers City and Miss Nautical City pageants, in order of appearance, are:
Alayna Sorget, the daughter of Brenda and Dave Sorget. She will perform a flute solo to the song “Locked Out of Heaven,” by Bruno Mars. She said her greatest accomplishment is maintaining a 3.94 grade point average (GPA) and earning academic honors throughout her middle school and high school years.
Alayna plans to pursue a career as a registered nurse and eventually become an anesthesiologist.
Hannah Hentkowski is the daughter of Frances and Mark Hentkowski. For her talent presentation she will recite a self-written speech titled “Perseverance.” Hannah lists her greatest achievement as earning a first place at the remotely operated vehicle competition.
She plans to attend Grand Valley State University to work towards a medical degree to become a doctor.
Cassidy Delekta is the daughter of Chrissy and Tom Delekta. She will do a spray paint art demonstration for the talent portion of the pageant. She said her proudest accomplishment is earning the honor roll for six-consecutive semesters.
Cassidy plans to obtain a degree in environmental science and one day start her own happy family.
Brooklyn Bober is the daughter of Jennifer and Wayne Bober. For her talent presentation she will do a sign language interpretation to the song “Born and Raised,” by the Hunter Brothers. Brooklyn said being the first-ever person from Rogers City to receive a job at the Michigan Department of Transportation Youth Development and Mentoring Program in Alpena is her proudest accomplishment.
She plans to attend Alpena Community College and transfer to the University of Michigan (U of M) to pursue a degree in engineering.
Madison Tulgestka is the daughter of Nancy and Chris Tulgestka. She will perform a solo on the piano of the song “Nuvole Bianche,” by Ludovico Einaudi for her talent presentation. She said her greatest accomplishment is donating more than 6 feet of her hair to organizations over the course of her life.
Madison plans to attend the U of M to obtain a degree in either environmental engineering or biochemistry.
Caitlynn Shadbolt is the daughter of Andrea Schulwitz and David Shadbolt. For the talent portion of the pageant she will do a vocal presentation of “Good Morning Baltimore,” made popular in the movie “Hairspray.” Caitlynn lists her greatest accomplishment as having the opportunity to be a guest of State Rep. Sue Allor at the governor’s State of the State address.
She plans to pursue a degree in forensic science after graduation from high school.
Abigail Sterly is the daughter of Heather Sterly, Joe Darga and Mike and Dara Sterly. Her talent presentation will be a gymnastics routine to “Burlesque Remix.” She lists her greatest achievement as winning two first-place medals on the balance beam during the 2018-2019 season.
Abigail plans to pursue a degree in criminal justice and attend the police academy.

The teen contestants are:
Ava Kelly is the daughter of Pennie Hoeft and Robert Kelly. Her talent presentation will be a dance to “Fragile” by Kygo and Labrinth. Ava said her greatest achievement is earning a 3.94 GPA for her first two years of high school.
She plans to attend Saginaw Valley State University and pursue a career in clinical laboratory science.
Josephine Bellmore is the daughter of Lucinda and Scottie Bellmore. Her talent presentation will be a reading titled “Autism.” Josephine said her greatest accomplishment is getting good grades in school.
She plans to join the U.S. Coast Guard and then become a pediatric nurse.
Niya Hoffman is the daughter of Anastasia and Michael Hoffman. She will perform a theatrical jazz dance to “Friend Like Me,” by Neyo for her talent presentation. Being accepted into the student leadership program is listed as her greatest accomplishment.
Niya plans to attend the Central Michigan University to study to be a teacher.
Lylian Bickhardt is the daughter of Amanda Bickhardt. For her talent presentation she will play “Old Time Rock ‘N’ Roll” on the flute. Lylian said her greatest achievement is staying true to herself.
She plans to pursue a career in cosmetology following graduation.
Haley Rose Grulke is the daughter of Jenny and Steve Grulke. Her talent presentation will be a vocal/dance performance of “The Sky,” by Dani and Lizzy. She lists that not being afraid to say what she thinks or feels is her greatest accomplishment.
Haley plans to become a home health care provider in the future.
Milissa Bannon and Nicole Bannasch again direct this year’s pageant. Joe Brewbaker is the master of ceremonies and Darrel Kelly will run the sound.
MiKaela Bannon is the choreographer for the event and will also do a dance performance to “Pirates of the Caribbean,” that she presented at the Miss Michigan Outstanding Teen Pageant last month. She is the current Miss West Michigan Outstanding Teen and earned first runner-up at the Miss Michigan Outstanding Teen Pageant in June.