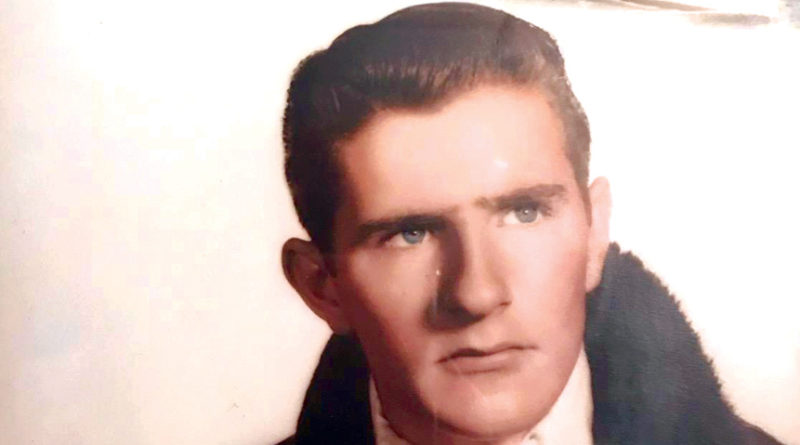 by Peter Jakey–Managing Editor
Many Americans will never forget where they were when two American astronauts walked on the moon for the first time.
The late Mark E. Baller Sr., a proud Navy veteran from Rogers City, never forgot where he was when the men came back to Earth. He was on the deck of the USS Hornet with a front-row seat to history, watching the lunar module’s ascent through the atmosphere and splashdown into the Pacific Ocean July 24, 1969. Those important anniversary dates will be remembered now through next Wednesday. The moon landing anniversary of the Apollo 11 is Saturday, while the recovery day will be 50 years ago, Wednesday.
Mark Sr. and the rest of the Hornet’s crew were there again, Nov. 24, 1969, for the recovery of Apollo 12 and its three astronauts when it returned. 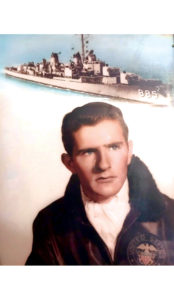 Mark Sr.’s story was featured in an article on the front-page of the July 20, 2014 edition of the Presque Isle County Advance to celebrate the 45th anniversary. It was the first time Mark Sr. shared his story with the local paper. He passed away less than two years later at his home, March 31, 2016, at the age of 73. His part in history lives on in his widow, Gloria, and their three surviving children, Tim Baller, Kristina Krajniak and Colleen Delekta, all who live in the Posen and Rogers City area. Mark E. Baller Jr. passed away Nov. 22, 2018.
“When I was young I never gave much thought of the historical significance of the things my father did while he was in the Navy,” said Tim Baller. “Looking back, I wish I would have asked more questions and listened to his stories a little closer.
“Knowing that he was there for Apollo 11 and Apollo 12 gives me a sense of pride in knowing that my father was involved in one of the country’s greatest historical achievements.”
“Everybody was looking up in the sky waiting for it to come down,” said Mark Sr. during the 2014 interview. “All of a sudden somebody hollered, ‘here it comes!’ Helicopters went out and picked the guys up.”
“Growing up I thought it was pretty cool that my dad was one of the guys that was there to witness the landing of the Apollo (11 and 12) in the ocean and see the astronauts,” said Delekta. “I think about him every time there is talk about the Apollo 11 and 12 and how he would tell the story again.”
President Richard M. Nixon was on board to welcome the returning astronauts back, where they were kept in quarantine inside the Mobile Quarantine Facility.
“We saw the astronauts in their quarantine huts,” said Mark Sr. “We could see them, but we could not talk to them. We got within 30 or 40 feet.”
“The reactions people give you when they hear the story is wonderful,” said Krajniak. “Most don’t think about a small town like Rogers City having someone like him in it.”
The Hornet’s crew was briefed about its recovery mission and left Long Beach, California three to four weeks before. Mark Sr. was a boiler technician second class and played a part in making sure the Navy was not tardy for its historic appointment.
“We operated the main plant,” said Mark Sr. of his role. “We made the steam and then sent it to the main engine, and that’s what propelled the ship.”
On July 16, Apollo 11 launched from Florida. At that time, Hornet was about 1,600 miles southwest of Hawaii at the Primary Launch Abort Area. If the astronauts had to make an emergency landing in the Pacific before leaving Earth’s atmosphere this was the place the ship needed to be.
The crew could hear the launch broadcast over the ship’s radio and knew they were underway. The Hornet then sailed north to the primary recovery site, 1,200 miles southwest of Hawaii. For the next week, practice recoveries continued, each day, starting before dawn and lasting through early evening in all kinds of weather. During this time frame, 16 or 17 training recoveries were completed.
Poor weather conditions and rough seas forced the Navy and NASA to move the splashdown site to another location 250 miles from the storm. The Hornet steamed full speed ahead to the new location 950 miles southwest of Hawaii. A few of the crew wondered if they would be late.
It was not – and an anxious nation watched as the crew performed their jobs perfectly. It was a great moment for the country, as well as the Navy.
“I joined the Navy to do a job and that was part of my job,” said Mark Sr.. He also served in Vietnam in 1970.
“My dad was very proud to serve his country and to be a Navy Veteran. He wore his uniform with pride!” said Delekta.
“I know my dad was proud of his time in the Navy and it carried through his retired years in Rogers City with the cleaning of the monuments at City Hall, and even cleaning other soldier’s headstones,” said Krajniak.
“We think about the moon landing more than your average family because of our father’s involvement,” said Tim Baller. “In 2016, when he passed away, we had an urn built that looks like the space capsule in which he helped pick out of the ocean.
“Considering the rarity of the event he witnessed, my dad was very humble. He demonstrated this by not telling the story unless he was asked about it. He did not think he was better than anyone because he was there. I am very proud of the historical ties I have to this event because of my father.”