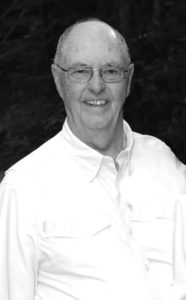 He was born April 11, 1935 in Port Huron to LeRoy and Marion (Neely) Stoutenburg.

Stu became a teacher and taught in Howell. Later he pursued his love of teaching and graduated from Central Michigan University with a master’s degree in elementary administration and held the position as principal for 18 years. He went on to teach in the Clio High School in his second love, art, retiring in 1995.

Stu was very active in the Clio community joining many organizations such as Boy Scouts of America, the Clio Jaycees and was a life member of the National Rifle Association.
He earned his Masonic membership in the Davison Lodge, Genesee Lodge and the Alpena Lodge. Stu was of the Royal Order of the Jesters Court No. 74, Scottish Rite Valley of Bay City, Elf Khurafeh Shrine Temple, a life member of the Elf Khurafeh Shrine Clown unit for 30 years, member of the International Shrine Clown Association and became a member of the Rogers City Masonic Lodge No. 493 and a member of the Alpena Shrine Club. Later became a van driver taking children to the Shriners Hospital for Children in Chicago. Stu was an avid hunter who enjoyed spending time in the woods.

Stu was preceded in deat

h by his parents, and a brother, Dale Stoutenburg.

Visitation was at the Beck Funeral Home, 229 N. First St., Rogers City, Saturday, July 27 from 4-8 p.m. with a Masonic service that evening. Visitation continued at Westminster Presbyterian Church in Rogers City until time of his funeral with the Revs. Dr. Greg and Karen Zurakowski officiating.

Memorials may be given to Westminster Presbyterian Church or Shriners Hospital for Children in memory of Stuart Stoutenburg.