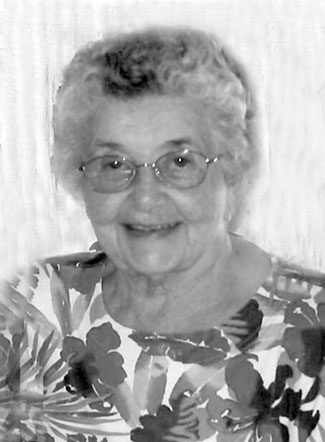 She was born to John and Cecelia (Szatkowski) Muszynski January 20, 1921 in Posen.

On December 3, 1943 she married Edward Max Schultz in Bowling Green, Ohio during World War II. Their marriage was blessed April 6, 1944 at St. Ignatius Catholic Church in Rogers City. In later life she married Edwin Marvin Schultz January 11, 1992. Eleanore graduated from Rogers City High School as class valedictorian in 1939 and in 1943 from Central Michigan University (CMU) with a Bachelor of Arts degree in secondary education. The Cheboygan School board employed her in 1943-44 as a high school mathematics teacher. The following year she worked at Rogers City High School teaching mathematics. She left her teaching career in the fall of 1945 to begin motherhood and to raise her two children. She resumed teaching in 1953 at Posen High School and left in 1962 to begin a teaching position in Rogers City. In 1967 Eleanore earned a master’s degree from CMU in education with a concentration in biology and mathematics. She retired from Rogers City Area Schools in 1982. Eleanore was a member of St. Ignatius Catholic Church and the Daughters of Isabella, serving as the first elected regent, in addition to several other offices. She was also a member of the Michigan Association of Retired School Personnel and a life member of the Michigan Education Association, the National Education Association as well as Kappa Mu Epsilon, the college fraternity of mathematics. Eleanore found enjoyment in researching family history and genealogy, keeping in touch with family, friends and former students and especially attending her students’ class reunions both in Posen and Rogers City. She also enjoyed reading books and magazines as well as working crossword puzzles. For most of her life she was an avid gardener. She described working the soil as therapy for the soul. In addition, Eleanore traveled extensively visiting all 50 states, many provinces in Canada and several European countries. Her travels also took her to Russia, Japan, China, the Holy Land, India and Egypt.

amazoo, Erin Schultz of Mattituck, New York and Michael Schultz of Lansing; as well as six great-grandchildren, Nicholas, Andrew, Matthew and Lauren Jacobs, and Julian and Sami Horvitz. Also surviving are many beloved nieces and nephews.

Visitation was at the Beck Funeral Home Sunday, October 6, where the Daughters of Isabella recited the rosary that evening followed by the parish wake service. Visitation resumed Monday at St. Ignatius Catholic Church until time of Mass with the Rev. Rolando Silva officiating.

Burial will take place at Memorial Park Cemetery at a later date.
Memorial donations may be given to St. Ignatius School or a charity of one’s choice. Online condolences may be addressed through www.beckfuneralhome.org.