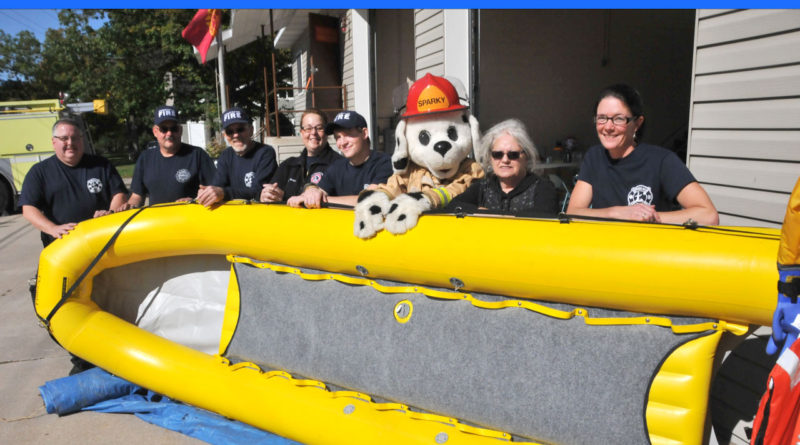 It was more of a celebration than an open house in Presque Isle Township.

The long, rebuild of the Presque Isle Township Fire Department (PITFD) has made many significant strides in the last four years.

The fruits of the labors of all who have worked behind the scenes were on full display in the bright autumn sun.

Fire trucks were parked near the road and some of the newest equipment was available for the public to see for the first time, including the rapid deployment craft that is specifically designed for ice rescues.

It can be inflated in a matter of seconds using self-contained breathing apparatus carried on the backs of firefighters.

The craft can be pulled by a personal watercraft during the summer months or a snowmobile during the long winters. It’s the latest in technology in regard to ice rescue devices.

The fundraising effort received lots of support after a woman lost her life earlier this year falling through thin ice on Long Lake.

“Had they had a craft like this, it would have been a lot easier. I’m sure of that,” said interim chief Bill Forbush.

Only months after the tragedy, the Long Lake Improvement Association donated $5,000 of the $9,500 that was needed. That covered the entire cost of the bright yellow boat.

Another new addition was a bright red Ford F-250 rescue rig with an 8-foot slide out to make equipment easier to access. It’s a new truck that is completely paid in full.

“This event has been fantastic,” said Forbush. “We’ve had people from as far away as Mt. Clemens, as well as a lot of local folks – Rogers City, Alpena. The key is that residents get to see w

hat is in place to protect them. We’ve had a lot of our neighbors here and that is wonderful.”

“It’s wonderful,” said Sandie Nowak, who is on the fire department’s auxiliary. “To look out there and see the vehicles and the people, and how far we’ve come, it’s awesome.”

“We had a good turnout, the weather was beautiful,” said Dick Nowak who is on the PITFD board. “Everybody seemed interested in what we are doing.”

Regarding the four-year rebuild, Dick Nowak was pleased to add that all the equipment on the property is owned outright, “and will never go anywhere.”

There was one other open house about a year ago to show people the department was back in business.