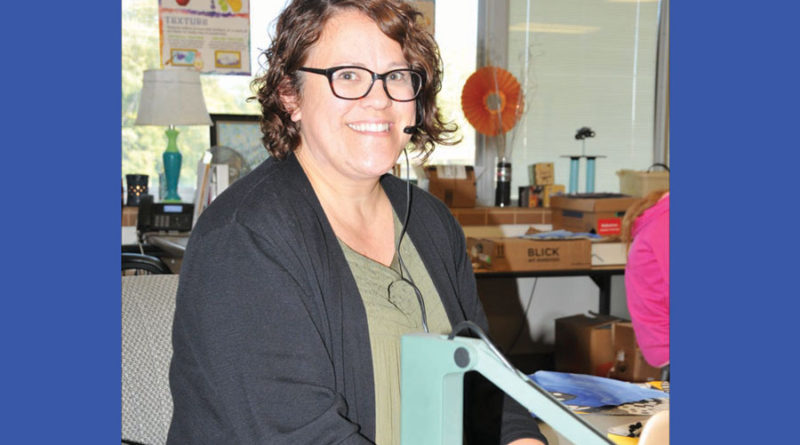 Mandy Polaski will be honored as the 2020-2021 Teacher of the Year. The announcement was made last week by Rogers City Area Schools.

“It’s a very nice honor and a privilege,” said Mandy, after her final art class of the day. “I’m not going to lie. It does feel good to be recognized because you do put in a lot of more work than people realize. It’s not an 8 a.m. to 3 p.m. job.”

Mandy started at RCES as a first-grade teacher in 2010.

Becoming a teacher was a dream of hers since she was a little girl attending St. Ignatius Catholic School, but landing a job was far from easy following graduation from Aquinas College in Grand Rapids.

She was looking for her first teaching job, and her future husband, Ken Polaski, was laid off. Teaching jobs at the time were even difficult to find in a large city like Grand Rapids. The couple was at a crossroads in their life and had the opportunity to come home.

“We got married and moved back here,” said Mandy. “My dad had a house we could live in.” She also knew there were some teachers that were going to retire.

While she waited, Mandy worked at the Presque Isle County Advance as a staff writer/photographer/columnist until taking a job at the now closed Bingham Arts Academy in Alpena in 2007 as a preschool teacher. She worked her way up the ladder before an opening came up in Rogers City.

“Mandy is an exceptional teacher,” said Waibel in her nominating letter. “She sets the bar high for herself and her students. Mandy’s students are enthusiastically engaged in the learning process, because her lessons are innovative, energetic and positive.”

Mandy is involved in many district committees. This school year alone she is helping head up the district anti-bullying team. The first meeting is Oct. 16. She also is the president of the Parent Teacher Organization.

In addition, she serves as co-chairman of the mother/son bowling event, co-chair and master of ceremonies for

the Ladies Night Out fundraising event, and has taken over the researching and scheduling of schoolwide assemblies for the district. She spearheaded the building of a float for the Nautical City Festival parade that featured and promoted the district.

Two years ago, Mandy and her students participated in Adopt-A-Classroom projects following hurricanes in Florida and Texas.

“Mandy single-handedly organized and facilitated a fundraiser for a Rogers City student who was in a car accident,” said Waibel.

“Mrs. Polaski does a remarkable job creating positive relationships and diverse lessons for her students,” said RCES principal Steve Kowalski. “Her students are always engaged in her instruction and work on challenging tasks that they are very interested in. Our Hurons’ family is very proud to have her be selected as Teacher of the Year!”