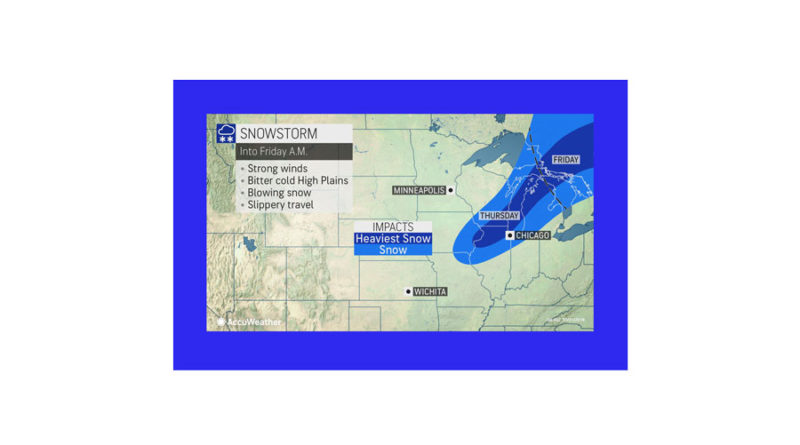 A winterlike storm continued to unload snow over the Midwest on Thursday, making Halloween feel more like Christmas in many areas and leading to a 96-year-old snowfall record being shattered in Chicago.

The same storm system that brought snow and cold to the Rockies earlier this week tracked across the central United States into early Thursday morning, unleashing heavy snowfall, fierce winds and brutal cold. Moderate to heavy snowfall will occur from eastern Iowa, northeastern Kansas, Illinois and southern Wisconsin as the storm strengthens throughout the day Thursday.

Up to 5 inches of snowfall had already buried parts of Iowa on Thursday morning, leaving roads in central and eastern parts of the state snow-covered and slick, according to the Iowa Department of Transportation (Iowa DOT). More than 240 plows were out in force across eastern and southeastern Iowa on Thursday morning as snow thumped across the area, Iowa DOT tweeted. However, officials cautioned that roads may still be slippery and people should “buckle up, slow down and allow extra space between vehicles.”

Over 6 inches of snow piled up in Sinsinawa, Wisconsin, by midday Thursday.

On Wednesday, Chicago experienced its earliest snow day in the season on which an inch or more fell since Oct. 20, 1989. It was also only the 10th inch-plus snow day to occur so early in the season, according to the National Weather Service (NWS) office in Chicago. A record snowfall of 1.2 inches was recorded at Chicago O’Hare International Airport on Wednesday, smashing the old record of 0.7 of an inch set way back in 1923.

Some areas surrounding Chicago picked up 2-3 inches of snow on Wednesday, according to the NWS.

A new daily snowfall record for Halloween in Milwaukee was set at 7 a.m. local time Thursday when 1.1 inches of snow were measured. The previous record was 0.4 of an inch in 1926.

Meanwhile, in the state capital of Madison, a new monthly snowfall record for October was set. A total of 5.5 inches was reported through Thursday morning; the previous October record for the city was 5.2 inches back in 1917.

Meanwhile, much colder air will rush in as the storm evolves. Temperatures near freezing will allow an area of rain to mix with and change over to snow.

Moderate to heavy snow moved into Chicago during Thursday midday. As temperatures slipped a few degrees, roads in the western suburbs became slippery. Flight delays and cancellations were increasing at O’hare Airport.

“This transition will take place in northern and central locations of the Lower Peninsula of Michigan into this afternoon,” Ryan Adamson, AccuWeather meteorologist, said. Snow accumulated around Madison, Wisconsin, on Halloween. The city is experiencing its snowiest October ever. Photo/Twitter user @dombarker1

Snow is forecast to spread southeastward across the Lower Peninsula of Michigan and into northern Indiana and northwest Ohio through Thursday evening.

Total snowfall from eastern Iowa and southern Wisconsin to northern Michigan is forecast to average between 3 and 6 inches. An AccuWeather Local StormMax™ of 8 inches can occur in part of the Upper Midwest and 14 inches (36 centimeters) in central Ontario. Where snowfall rates will be generally light, accumulation may not occur on roads initially. As the storm intensifies into Thursday night, snow-covered roads are expected to result in slippery travel conditions and delays. In areas where this is the first snowfall of the y

ear, snow may stick to roads quicker where a layer of salt hasn’t developed yet.

Wet snow can stick to trees and power lines and weigh them down. Any areas that still have many leaves on the trees will be more susceptible to damage. However, a significant windstorm will also accompany this system, which will help to knock many leaves off the trees.

AccuWeather, recognized and documented as the most accurate source of weather forecasts and warnings in the world, has saved tens of thousands of lives, prevented hundreds of thousands of injuries and tens of billions of dollars in property damage. With global headquarters in State College, PA and other offices around the world, AccuWeather serves more than 1.5 billion people daily to help them plan their lives and get more out of their day through digital media properties, such as AccuWeather.com and mobile, as well as radio, television, newspapers, and the national 24/7 AccuWeather Network channel. Additionally, AccuWeather produces and distributes news, weather content, and video for more than 180,000 third-party websites.