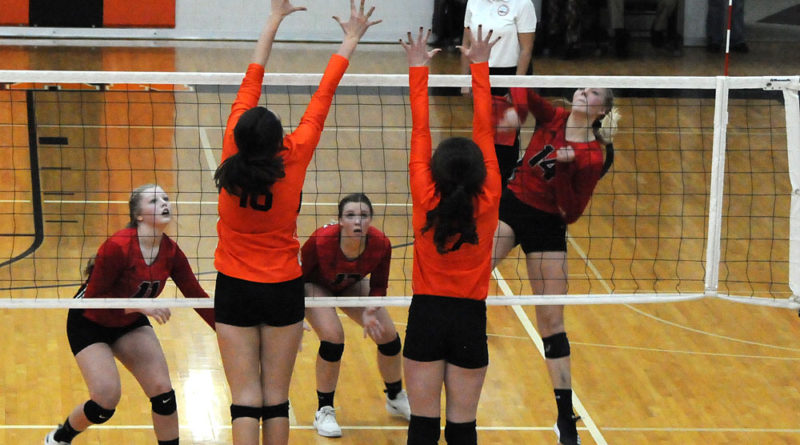 “We set goals every year and sometimes we accomplish all of them and sometimes we accomplish some of them and this was one of those years. You always like to win some hardware, whether it is a conference championship, and we got one of those, or a district championship, and we got one of those. But we are really not satisfied with that kind of stuff. We are not really happy unless we can do more,” said Onaway coach Steve Watson.

His Cardinals played Rudyard nearly evenly for the two-hour match at Cheboygan High School, but could not get by the Bulldogs. Both schools brought energetic student cheering sections that added spice to an entertaining match.

“There are a lot of teams around the state of Michigan that win a district, and this is not to take away from winning a district, but winning a regional and getting to the quarterfinals is special. It is hard to not look at that as a disappointment. It is another one up on the banner but we are about bigger things than that,” Watson said.

Things looked good for the Cards in the first set after starting slowly by trailing 7-3. A kill by Breya Domke, a tip by Mallorie Neelis and two errors by Rudyard cut the lead to 8-7. Then, behind the serving of Malaurie McLean, the Cards went on a 6-0 run that featured two aces from McLean and a kill by Cloe Ehrke. With the Cards up 15-13, Rudyard called timeout and responded by taking a 19-18 lead.

A service error and a shot that rolled on the net before dropping to the floor on the Rudyard side gave Onaway a brief 21-20 lead. A kill and two aces help Rudyard to a 23-21 lead in this see-saw game.

Facing match point, and error by Rudyard gave the Cards new life, but an error and a kill gave the Bulldogs a 27-25 win.

Now facing elimination in the fourth set, Onaway showed character by jumping out to a 5-0 lead behind the serving of Ehrke. Rudyard worked its way back to tie the score at 10-10, 15-15 and 17-17.  At 17-18, a blown serve seemed like a momentum swing for the Cards, but they returned the service error and Rudyard reeled off the next five points.

Malaisha Van and Jackie Sellke combined for a block and then a missed attack made it 22-20, Rudyard. But a kill down the middle and an ace set up match point at 24-20. The Cards’ attempt fell short and Rudyard moved on to the quarterfinals.

“We had a couple of sets where they were decided by two points and a couple of things mildly went against us. We had one set where we had a lot of errors. That is one