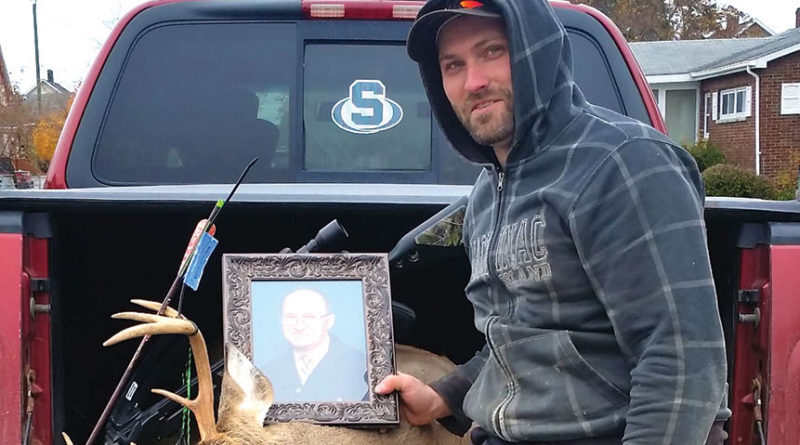 It’s always the hunting traditions that get passed along from family member to family member. Or it could be that special item that holds sentimental value.

Dwayne Olden of Rogers City has one such item in his possession. It’s a Barnett Jackyl crossbow given to him by his mother, Christmas 2018.

The last owner was Dwayne’s grandfather, Leo Boyk of Posen, who passed away in January 2018 at the age of 75, due to complications from a stroke.

Leo was 74 when he purchased the crossbow, and made good on the one season with it, getting a handsome 8-point buck he fully intended to mount before taking ill.

“He cut the head off and put it in the garage,” said Leo’s daughter Audrey Reprogal. “He was not able to get the head mounted.” Because it sat too long, only the horns were saved and mounted and later given to Leo at a nursing home.

“He was so happy,” said Audrey. It would be Leo’s last buck.

The crossbow was kept in the family.

“It needed to go back out and hunt,” said Audrey. “It just seemed like the right thing to do.”

The crossbow that meant so much was put in the hands of grandson, Dwayne, who took it out last week to hunt on a night he will not soon forget.

Dwayne went out to sit in the blind at the last minute and saw a couple of spikers come and stand around for 15 to 20 minutes. It’s not what he came out to see. He was just about to call it a night, and was closing the blind window, when the spikers took off in haste.

“To my surprise another bigger buck came in,” Dwayne recalled. “He came out, looked around a bit, then turned around, opening up a perfect heart shot at 35 yards.” It was a perfect shot. The buck kicked in the air about 4 to 5 feet and fled.

Like a skilled hunter, Dwayne listened and heard trees breaking and crashing, and then silence.

“With excitement running through my body I set out to find him. I took a few moments to control my excitement and analyze which way he had run. I followed the tracks of my buck to find no blood in the first 40 yards. I moved another 10 yards and finally found blood on a poplar sapling.”

Now, a little cold, he ran back to his truck to get some warmer clothing and a fresh flashlight. He knew it had to be at least a 6-pointer, but o

nce located, Dwayne was delighted to find the 8-pointer he had been hopeful to get for three years.

“I immediately broke down in tears because I had finally got him,” said Dwayne. He called his mother, Audrey, to tell her. “Igot him, I finally got my 8-point! I could hear her excitement, then I told her with what I got him with. Needless to say we both cried.”

This buck will be mounted not only in Leo’s memory, but to remember the moment forever.

Interestingly enough, the picture of the buck on the pamphlet of Leo’s funeral looked just like the buck Dwayne got.