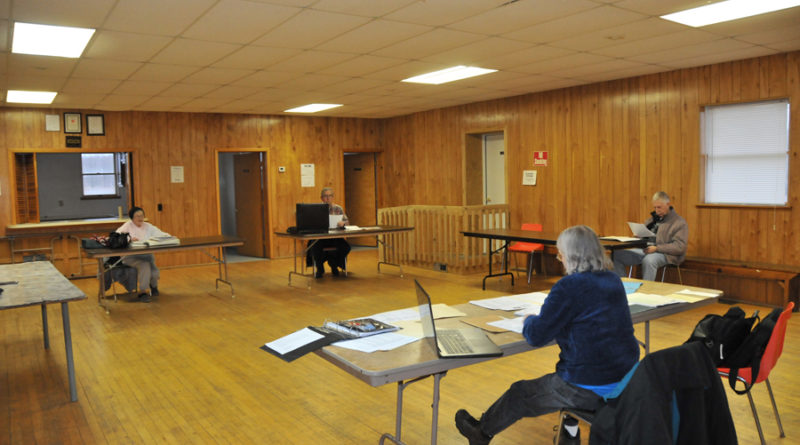 Townships in Michigan are required by state law to hold an annual meeting to approve the upcoming year’s budget before April 1. However, with COVID-19 restrictions in place, holding a meeting that complies with both old and new state requirements is not so easy. But Ocqueoc and Metz townships in Presque Isle County proved that it could be done.

The Ocqueoc Township hall on North Allis Highway is quite spacious and has ample room for social distancing.  Pam Schaedig, township clerk, told the board during the March 30 annual meeting, “I called MTA (Michigan Township Association) and they said township officials were critical infrastructure, so we could go ahead with our meeting at the hall as long as we had less than 10 people and we stayed at least 6 feet apart.” The hall was set up with tables for the township officials located at the far edges of the room, one official per table.  The full board is just five members and one of them had to be absent, so numbers weren’t a problem.

Even though a couple of chairs were set up at a distance for the public, no citizens attended. Still, it was valuable for the board to be together. Members were able to talk through a change in the budget suggested by supervisor Jerry Counterman, to add a line item for possible road repairs, if matching funds from the county road commission became available. The budget, with that amendment, passed unanimously.

The Metz Township hall is much smaller with no space for social distancing, but public notice had already been given that the annual meeting would be held at the hall March 31 at 6 p.m. When asked what the township intended to do, township clerk Nancy Kandow said, “I just got off the phone with our supervisor, Nyle Wickersham. He suggested that we could hold our meeting by conference call, as long as one of the members is at the hall with a speaker phone, so anyone who saw the notice and wants to participate can give their comments.”

This approach complies with state law, because one of Gov. Gretchen Whitmer’s executive orders in response to COVID-19 allows public meetings to be held electronically, provided that both the members of the body and the public have an opportunity to participate.

Wickersham was posted outside the Metz Township hall at the appointed time, with speaker phone in hand.  The township’s budget for the coming year was tacked up on the outside notice board for the public to examine, but no members of the public appeared. The annual meeting lasted just three minutes, with the township budget approved as required by state law at 6:03 p.m., nearly six hours before the deadline.