Alice Eleanor Otremba (Pilarski), 94, of Posen, passed away Monday afternoon May 25, 2020 at Medilodge of Rogers City. 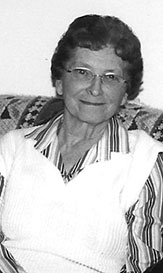 Alice was born April 7, 1926, and raised on her family farm in Metz.  Later in her adult years she met the love of her life Leonard Otremba, they were married September 16, 1945.  After marriage they moved to the Detroit area, she loved it there but Lenny missed the north. They returned to Posen and bought farmland, even going through rough times she grew to love it.

Alice was a wonderful homemaker who enjoyed planting flowers, decorating her lawn, and gardening; she took pride in her manicured lawn and garden. The outdoors was her serenity.  S

he canned everything she grew to provide food for the table, no one ever walked away from Alice’s kitchen hungry right down to the dessert.

She was preceded in death by her parents, Frank and Cecelia (Orban) Pilarski; husband, Leonard, April 9, 2017; a brother, Sylvester; a niece; and two nephews.