Harlan Henry Lamb passed away peacefully at his home in Pickford May 19, 2020, under the devoted care of his family and McLaren Hospice of Cheboygan.  He was 95 years old. 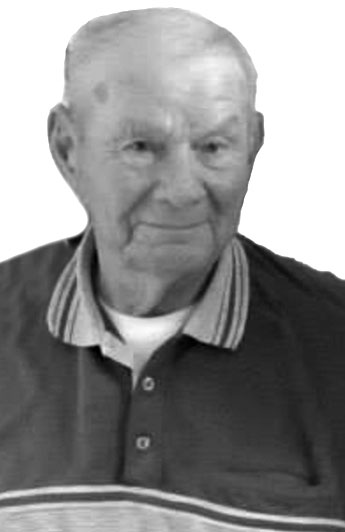 Harlan was born in Rogers City April 23, 1925, the second child and eldest son of Leonard and Laura (Mielke) Lamb.   He was raised on the family farm along with his seven siblings.   As Harlan described it in a letter to his brother, Neil, “they were great years.”  Among others, the Lamb household included his grandfather, Henry, who had emigrated from Ireland in 1895 and established the farm.  Harlan was strongly influenced by his grandfather.  According to Harlan, “What Grandpa liked to do, he did well. If you ever turned the grindstone while he sharpened his axe or helped him skid firewood, you learned how to do a job exactly as the boss wanted it done.  He was a master at getting – and keeping – your attention.”  To those who knew Harlan, it is easy to see that the Irish apple didn’t fall far from the tree.

Life changed for Harlan, like it did for everyone, after Pearl Harbor was attacked in 1941.  As he wrote in that same letter to his brother, “Everything changed after that.  People in jobs that were declared essential were forced to stay in them.  Farming was declared a critical job.  During the summer of 1942 I decided I just had to join the Navy.  I was afraid I would be frozen on the farm and miss taking part in a great adventure. I told Dad about my plan just prior to the start of school, my senior year.  I plowed up a storm the next few weeks with the old 10-20 International. About the middle of October, I went to Alpena and started the process of joining the Navy.  There were some tense moments with Mom when she realized I was serious about this.  She and Dad had to sign papers to allow it because I was only 17.  She held tough for two very long days but then, after making it clear she didn’t agree with what was happening, she signed the papers.” Harlan was inducted into the U.S. Navy November 2, 1942.   He served aboard an escort carrier in the Pacific, the USS Nehenta Bay, as gunner and radioman in a torpedo bomber.  He was discharged from the Navy in February, 1946.  Harlan never lost his love of flying and achieved a lifelong goal when he earned his private pilot license in 1977.

Harlan married Ruth Paull June 21, 1947 in Hawks.  They welcomed twin sons, Jeff and Mike, the next year.  In the 18 years that followed, eight more children were born.   In 1953, the family moved to the Upper Peninsula where Harlan worked on the construction of U.S. Steel’s new limestone quarry and mill in Cedarville.  Harlan proudly continued his employment with U.S. Steel until his retirement in 1986. Although he enjoyed the challenges of his career, Harlan was a farmer at heart and he was eager to return to that life and share it with his children.  In 1963, he and Ruth purchased a farm southeast of Pickford.  For the next 10 years, family life revolved around the busy routines of a dairy farm.  Although they moved on in the 1970s, Harlan and Ruth returned to farm life – this time west of Pickford – for their retirement years.

Harlan spent many of those years working with sons Mike and Dave on their dairy farms and tending livestock of his own.  Harlan was rarely idle.  He worked hard and loved to work – at whatever task was at hand.  Like most men of his generation, he was used to doing things himself and rarely hired work done.  It seemed he could build, fix, and do just about anything – at least in the eyes of his kids and grandkids.  He taught himself to use a computer and was eager to try new technology of every kind.

An avid beekeeper, Harlan was fascinated by the intricacies of the hive – and very impressed by the work ethic of the bees.  “Honey day” was one of his favorites as family and friends gathered to help with the annual honey harvest.   He was a dedicated fan of Michigan State basketball and an active member of Bethel Lutheran Church in Cedarville.

Throughout his married life, Harlan remained keenly focused on his family.  He unfailingly provided for his large brood and did his best to meet the various needs that 10 children presented.  The results weren’t always perfect, but those occasions served as their own teaching moments.   His priorities were God, country, and family and he lived a life that reflected those priorities.  By his actions, he taught his family the things he valued:   give a day’s work for a day’s pay, vote, never stop learning and never give up.  He also taught his kids other things, with varying degrees of success.  Things like how to tie a bowline knot (the rabbit goes around the tree) and how to drive a tractor.  His hayfield signals were famous – and largely incomprehensible to most of his crew. He maintained that dawn was the best part of the day and that there was always time to get an ice cream bar after church.

He enjoyed Irish music, the daily news, and a spirited debate.  With Harlan at its head, there were countless meals around the family table where information was shared and opinions voiced on a wide-variety of topics. It is impossible to quantify the value that has been derived through these many years of sitting down around that table to eat and converse in a respectful and open (if occasionally loud and very animated) way.  The connections forged by Harlan – and Ruth – kept their large clan close to them and to each other, a legacy that will continue to be passed to the generations to come.

The Lamb family has now bid farewell to both of their parents/grandparents.   On the occasion of their 50thwedding anniversary in 1997, their eldest son, Jeff, expressed sentiments that are still true today.  He wrote, “The driving force behind Mom and Dad has always been the family…  We thank the Lord for allowing us to have these two as parents and grandparents and for their blessing and guidance to us all.”

Harlan was preceded in death by his parents, his daughter-in-law, Georgia (Sims) Lamb, and his siblings Marion Patterson, Hertha Stiansen, Leonard Lamb, Jr., Byron Lamb and Neil Lamb.  He is survived by siblings Alger (Janet) Lamb of Rogers City and Doris Bernlo

The family wishes to thank all those who provided care to Harlan and supported the family’s efforts to do the same: Dr. Robert Mackie and the staff of Riverside Medical Associates; Tammy Kovacs (“Cami” to Harlan), social worker at Evergreen Nursing Center in St. Ignace, and the staff of that facility; and McLaren Hospice, especially Kim Lamb, RN.  The efforts of all were and are deeply appreciated by the Lamb family.

A private funeral is planned for Saturday with burial in Cottle Cemetery in Marquette Township, Pickford.  R. Galer Funeral Home is assisting the family.   Condolences may be sent to the family at www.rgalerfuneralhome.com. Memorials may be directed to Bethel Lutheran Church in Cedarville.