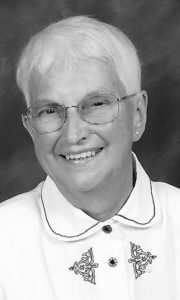 The daughter of Charles and Martha (Hill) Weathers, was born in Detroit March 4, 1931.

She married Douglas Alfred Parker September 17, 1949 at Grandale Presbyterian Church in Detroit. Douglas was a Detroit police sergeant who retired in 1975.

Doris worked for insurance companies and earned a certificate from the Insurance Institute of America and a solicitor’s license from the state of Michigan. After moving to Ocqueoc, Doris served as secretary for Hospice for Presque Isle County for 12 years. She was secretary of the Huron Beach Civic Association for 26 years.  She was a columnist at the Cheboygan Daily Tribune beginning in 1992, and was also a contributor to the Mackinac Journal.  She compiled a history of the Huron Beach area entitled “On the Shore of the Sweetwater Sea.”

She was a member of Trinity Lutheran Church, the Hammond Bay Area Anglers Association, Ocqueoc Scarlet Ladies, commissioner of the Ocqueoc River Waters

hed, volunteer for Hospice of the Straits and served on the Ocqueoc Township Election Commission.

She was preceded in death by husband, Douglas; her parents; and a sister, Carol.  Memorial services in Ocqueoc will be held on a later date.

Inurnment will take place at White Chapel Cemetery in Troy.

In lieu of flowers, memorials are suggested to Trinity Lutheran Church-Ocqueoc.