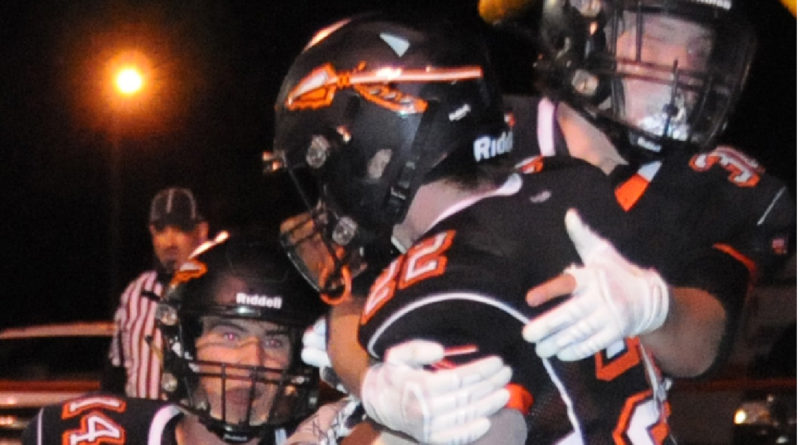 After nearly having no football season at all, the season started with a bang Friday at Gilpin Memorial Field. Rogers City scored on the last play to complete a big comeback in a 24-18 win over the Alcona Tigers.

A 21-yard pass from Isaac Hein to Matt Newhouse as time expired capped a big comeback for the Hurons. A series of big plays set up the biggest one of the night.

TO VIEW FOUR MORE PAGES OF COVERAGE, FOLLOW THIS LINK:

With the score tied at 18-18 and 1:43 left in the fourth quarter, Rogers City took over on their own 40 after a forcing an Alcona punt. A 15-yard scramble by Hein moved the ball to the Alcona 45. But on the next play the Hurons were guilty of holding, bringing the ball back to the Tigers’ 47.

Hein flipped a pass to fullback Dillion Cook on the next play, good for three yards and the clock ran down to 45 seconds. With receivers streaking out long routes, Hein again had to scramble to his left, this time good for 14 yards. Coach Jesse Fenstermaker yelled for a timeout with just 20 seconds left. Now at the Alcona 30, Hein again could not find an open receiver and calmly found room to run for a 9-yard gainer and another timeout. Now just seven seconds remained before a possibility of overtime.

The Hurons had been trying long passes with limited success all night. This time, with the game on the line, a pair of seniors hooked up for a big, big play. Hein took the snap out of the shotgun, rolled to his left then back to his right, getting good protection behind the offensive line.  By that time Newhouse had found his way to the right corner of the end zone. Hein lofted a high-arcer and Newhouse leaped for the ball over an Alcona defender, coming down with both feet inbounds at the back right corner of the end zone. That set off a celebration as elated Hurons raced to congratulate Newhouse as a dejected Alcona team could not believe their fate.

“On that one Matt just wanted it more than they did. Isaac Hein was amazing out there and the defense was outstanding tonight,” said coach Jesse Fenstermaker after the game.

Rogers City held tough after a stunning end to the first half. After Hein connected with Cook on a 13-yard pass play with 48 seconds left in the second quarter to tie the game at 6-6, Alcona responded by returning the kickoff 77 yards for a score. That made the score 12-6 with 35 seconds left in the half. But wait, the Tigers were not done yet. An onside kick was recovered by the Tigers at the Hurons’ 42. On the next play, a 42-yard run up the middle put the Tigers up 18-6 at half. Three touchdowns came in the last 48 seconds of the first half leaving the Hurons a bit stunned.

That would be the last Tigers’ score of the game as the Hurons mounted a comeback as good as any ever seen at Gilpin Memorial Field. Wasting no time, the Hurons scored on their first possession, as Hein capped a 8-play drive with a 3-yard touchdown run. With Alcona driving as the third quarter ended, Cook recovered a fumble on the second play of the fourth quarter at the Hurons’ 33 to end a drive. That set up the game-tying drive for Rogers City. The Hurons used 12 plays to march 67 yards over the next seven minutes of game clock. Clayton Henry had runs of 11, 6 and 9 yards and pass reception good for 5 yards. Hein had runs of 6 and 3 yards. Hein’s pass to Cook covered the final 15 yards and made the score 18-18 with 4:54 left in the game.