It is with sadness that we say goodbye to another of our World War II veterans. On July 24, 2020 Hugh Joseph Donley passed away at his son’s home in Mt. Morris. He had just turned 94 July 4 but was not able to celebrate as he would have liked due to medical issues. 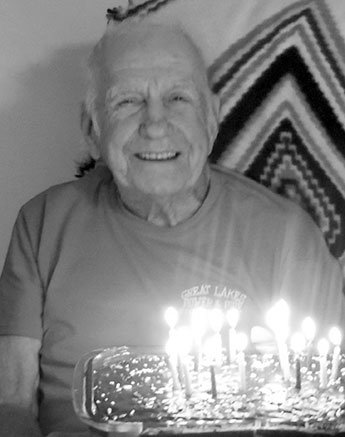 Hugh Joseph Donley was born July 4, 1926 in Flint to Hugh and Nellie Donley. His father passed away when he was still a young boy leaving his mother with a few children, he went to a boy’s home in Coldwater. In 1942 he changed his birthdate so he could serve in the Army even though he was only 16.  He served in the Army as a private E-2 until June 1, 1955.

He married Edna May Donley and had one son, Hugh Donley Jr. and three daughters. Edna passed away in 1969.

Hugh made his way to Onaway and October 1, 1976 married Dona. They were married until her passing in 1998.  Later Hugh became special friends with Alice Ganske and lived with her until she passed in December 2015. After her passing he ended up making his home at Lynn Street Manor and lived there until July of this year where he made a lot of friends.

Hugh loved to spend time at Rod and Linda Leach’s helping Ed Leach Sr. in the garage. He also loved to drive and did so as long as he could.  He would often visit the cemetery and get his morning coffee at various places in town. He was a member of Awaken Church and occasionally attended services at North Country Baptist Church also.   A graveside service will be held at Hillcrest Cemetery in Onaway Saturday, October 10, at 11 a.m.  The Rev. Kamron Oberlin will officiate.