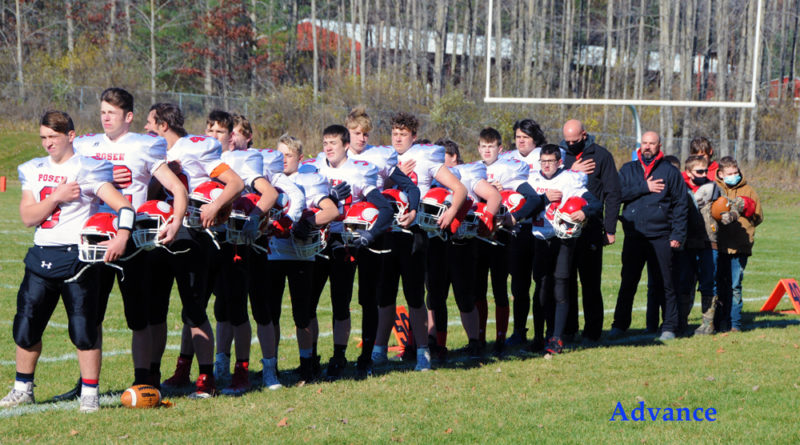 Posen’s football season came to a jarring end at the hands of Hale Saturday in a 72-8 loss to the Eagles. After scoring first on a dazzling 74-yard run by senior tailback Lucas Stone and quarterback Chase Dubie’s two-yard conversion, things went bad for the Vikings.

On Posen’s second play from scrimmage, Stone took a handoff from Chase Dubie, followed blocks by center Ethan Romel and right guard Joseph Konieczny, dodged a tackler in the defensive backfield and raced down the right side for the score. Posen led 8-0 with 6:27 left in the first quarter.

The Vikings got the ball after Hale’s fourth-and-8 attempt fell short at the Vikings’ 24. Hale had picked up two first downs, using 10 plays to move into Viking territory. Posen took advantage to get the game’s first score.

But that would be all the Vikings could muster on the scoreboard. Hale scored on an 11-yard run on its next possession, then again on a 25-yard run after a Posen fumble was lost near midfield. Hale led 14-8 with 2:28 left in the first quarter.

Posen punted on its first possession of the second quarter and Hale scored four plays later on a 46-yard run around the end to make the score 20-8.

Things got worse for the Vikings when leading rusher Lucas Stone left the game with an injury with 11 minutes left in the first half. After that, the Vikings had trouble moving the ball, as Posen rotated freshman Jack Romel at quarterback while moving Dubie to tailback for a few plays.

A fumble at the Viking 33 set up the next score. This time, with a stiff breeze behind him, the Hale quarterback lofted a bomb good for a touchdown on the first play of the drive. That gave Hale a 26-8 lead with 10:14 left in the first half.

Failing on a fourth-and-2, the Vikings turned the ball over on downs at their own 23. Hale’s first play resulted in a touchdown run and the two-pointer gave the Eagles a 34-8 lead with 8:17 left in the half.

Posen managed a first down on its next possession, thanks to two runs by A.J. Brunet. A 6-yard pass from Dubie to Logan Timm was all the yardage the Vikings could manage on the rest of the drive, as they turned the ball over on downs at their own 45.

This time runs of 24 and 21 yards gave the Eagles point number 40 with five minutes left in the first half. Hale ended the first half with a two-play drive that resulted in a touchdown with 1:59 left before halftime.

“It wasn’t our day.  I just told them it was a high school football game and we got beat by a better team today.  Life goes on, that’s all I can say,” said Posen coach Greg Pietsch.

Playing shorthanded didn’t help the cause, but Pietsch didn’t make any excuses.

“We have a lot of youth and inexperience but our kids played hard this year. They came to work every week. It has been a super-unique group of kids. I am

glad I’ve had the pleasure to coach them,” the coach said.

Any chances of a comeback or a duplication of the effort put up against then-undefeated Onaway last week disappeared with the injury to Stone.

Onaway had its undefeated season end at the hands of Newberry. The Indians took a 26-6 win over the hosting Cardinals Saturday. Details and photos from the game will be in the next edition of the Advance.