Linwood “Lindy or Lin” Sabin passed away peacefully December 6, 2020, with his loving wife at his bedside. He had been struggling for years with progressive supranuclear palsy, a neurological disease similar to Parkinson’s disease. 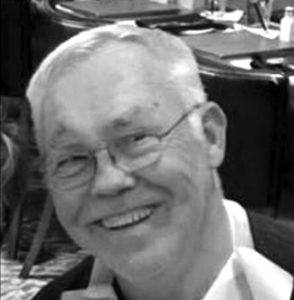 Lin was born October 31, 1944 in Rogers City. He attended Flushing High School and graduated in 1962. He played football and baseball, and was named a member of the all-Big 9 baseball team. After graduation he attended Mott Community College where he earned an associate degree in business administration and then attended Michigan State. In 1968 he began working as a patrol officer for the city of Flushing. He attended many classes at the Michigan Law Enforcement Officers Training Center. In 1998, he graduated from the 193rd class of the FBI National Academy with honors. Some of his career accomplishments include starting the Officer Friendly program for Flushing Schools, forming the Citizens Police Academy in Flushing, creating the Retired Senior Citizens’ Volunteer Program, founding Seniors and Law Enforcement Together.

He also assisted these organizations in helping to arrange significant amounts of financial support from the community. He served as sergeant from 1979-1989 and 1992 until his retirement in 1999. He served as interim police chief for Flushing 1990-1991. He also worked road patrol for Swartz Creek Police Department and Clayton Township.

He was awarded the Flushing Police Department Officer of the Year award (1975,1978) and the Hundred Club Award for bravery above and beyond the call of duty (1983 and 1986) being the first multiple recipient awardee.

He served in the United States Army Reserves as a staff sergeant and a drill instructor having been stationed at Fort Leonard Wood, Missouri and Fort Polk, Louisiana.

Lin leaves behind his wife of 55

years, Kathleen Weir Sabin; a son, Gregory Sabin (Susanna), Boston, Masschuettes; two grandsons, Alexander Sabin of Saline who attends Eastern Michigan University and Zachary Sabin also from Saline attending Carnegie Mellon University; and many aunts, uncles, cousins and special friends. Lin loved his family, was so proud of his son and daughter-in-law and all they had accomplished, and the grandsons were the apple of his eye. They could do no wrong. He loved fishing, hunting, boating and watching his grandsons play football.

His wish was to be cremated and a memorial service will be held at a later time.

In lieu of gifts or flowers, the family suggests donating to Thin Blue Line or a local hospice. Many thanks to everyone involved in his care and those who offered prayer and support.