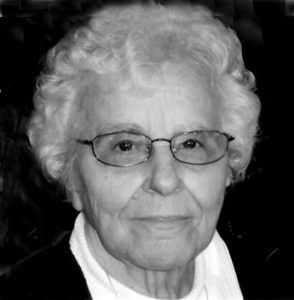 She was born January 10, 1927 in Posen to Peter and Joanna (Rygwelski) Lewandowski.

Blanche lived in Posen all her life. She attended St. Casimir Catholic School, graduated from Posen High School in 1946. On January 10, 1948 she married Robert Polaski at St. Casimir Catholic Church. Blanche was a member of St. Casimir Rosary Sodality as a group leader, member of the parish council and worship committee. She was also a member of the South Presque Isle Veterans of Foreign War Auxiliary No. 7804 as president for three years and as patriotic instructor. She served as the Posen village clerk for 25 years, retiring in 1990. She and her husband, a village trustee worked on many village festival floats and dinners. She enjoyed many years of camping, gardening, cooking, baking, flowers, her polka music, jigsaw puzzles, Detroit Tigers’ baseball, Lions’ football and traveling to visit family and grandchildren.

>Blanche was preceded in death by her husband, Robert; two sons, Gerald and Michael; parents, Peter and Joanna; six brothers; six sisters; and many brothers-and sisters-in-law.

Visitation was at the Beck Funeral Home Friday, July 9, where the rosary will be recited followed by the wake service. Visitation resumed Saturday at St. Casimir Catholic Church through time of her Mass with the Rev. Arthur Duchnowicz officiating.

Memorials may be given to Hospice of Michigan in memory of Blanche Polaski.