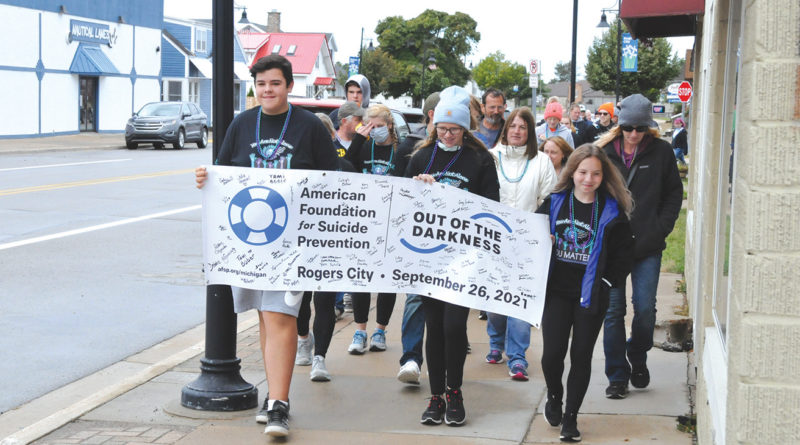 More than 150 walkers gathered Sunday to raise awareness and funds for the American Foundation for Suicide Prevention (AFSP).

A series of booths were set up behind the Rogers City Area Senior & Community Center with information on AFSP, beads representing support for various participants in the walk, support for survivors, mental health professionals, a memory tent to remember loved ones and a booth to post notes of hope.

Jane Trestain, local coordinator of the event thanked a group of volunteers who worked the event before offering remarks to open the event. She first became involved with AFSP in March when she started organizing Sunday’s march.

“The AFSP first started to mean something to me a couple of years ago when my son died of suicide. Jake had just turned 31 years old. He was a funny guy, he loved the outdoors, he loved his family.  We knew he had some issues with depression. We did not know how bad they were. That is when I started my journey with the AFSP,” she explained.

She attended her first AFSP walk a few months after her son’s suicide and became involved with the organization.

“There were too many people that I heard about afterwards that also had lost their family or friends to suicide. And it just isn’t spoken about. People just don’t want to talk about it. It is a taboo subject that is super-uncomfortable. So, I am trying to make it so it is not so uncomfortable and I am planning to talk about it a lot,” Trestain said.

Corbin Standley, chairman of the board of directors of the Michigan chapter of AFSP, praised the work of the Rogers City and noted that 10 other walks were happening in the state during September and October.

He explained the AFSP is the largest national organization in the country dedicated to saving lives and bringing hope to those affected by suicide. There are chapters in all 50 states with more than 400 similar walks happening across the country during September and October.

The group is focused on prevention education, advocacy at the state and federal level, funding research to study suicide research and the group provides many resources for support groups.

“All of the money we raise at these events helps fund education and research and advocacy and support to save lives and offer hope to those affected by suicide. Our biggest goal is to eliminate the stigma around mental health and suicide and talk about it and be loud when we are talking about it. One of our campaigns is ‘be the voice’ and we are going to keep being the voice and keep working to prevent suicide,” Standley said.

Trestain then highlighted the significance of different colored beads being worn by participants in the walk.

“Each of us has our own story and our own reasons for being here today. As we gather here today we remember those reason and share a symbol to keep them in our sight and in our hearts. Our honor beads pay tribute to loved ones lost and personal struggles or victories,” Trestain said.

White beads were honoring the loss of a child; orange is for loss of a sibling; green is for personal struggles or attempted suicide; red is for the loss of a spouse or partner; purple recognizes the loss of a friend; teal is to show support for someone

who struggles or has attempted suicide; gold is for loss of a parent; silver is to honor loss of a first responder or member of the military and those who wear blue beads show their support for suicide prevention.

She called several people up to share personal stories telling about loved ones lost to suicide.

Trestain said the goal of the walk was to raise $10,000, and the event has until the end of the year to accomplish that goal.

“Currently we are over $18,000 raised. That is amazing, especially for a first-time walk,” Trestain said.

With that, the group started its march down Third Street before returning. Trestain may be contacted at jtrestain1@hotmail.com. Resources may be obtained at www.afsp.org/resources.