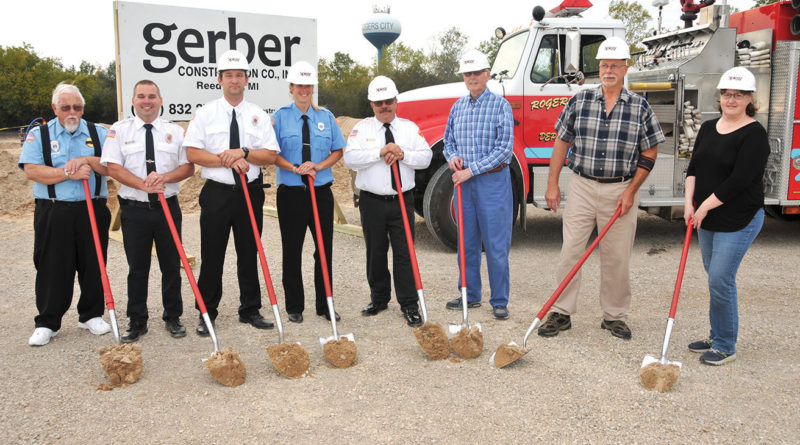 It was a moment many thought would never happen, but Monday there was an official groundbreaking ceremony for the new Rogers City fire hall, the future home of the Rogers City Area Fire Department.

Members of the Rogers City Area Fire Authority (RCAFA) along with representatives of Gerber Construction and the architectural firm Spicer Group gathered in the industrial park at the corner of South Sixth and Park where construction is well underway.

“Thank you for joining us as we celebrate this exciting day for the authority,” said Sarah Melching, Presque Isle County emergency services coordinator, who was the main speaker at the event.

“From my understanding, this has been a long time in the making and I am beyond excited for the men and women of the department to be getting a new facility that will accommodate their equipment and be more efficient at responding to emergencies,” said Melching.

“It has been a long time trying to get it,” said RCAFA chairman Neil Sorgenfrei, who is the only remaining original member of the authority.

The fire hall has been located at City Hall for decades, but has outgrown the facility. That became all too evident following the February 2006 fire at the Presque Isle County Advance building and the adjoining structure, Big D’s Pizza. Many agencies battled the blaze that winter day, but the Rogers City Fire Department did not have a ladder truck.

That did not last as one was purchased later that same year, but it barely fit in the barn.

However, there had been talks about moving the fire hall to a new location farther back than that.

d to see it happen.”

“It’s going to be nice, our response time should be better,” said chief Mike Kroll.

“I’m excited that it is moving forward,” said recording secretary Katie Kuznicki. “It’s been a long, long project. There have been lots of roadblocks and we’ve gone through them or around them.”

One of the snags was funding from the United States Department of Agriculture, but Huron State Bank of Rogers City got involved and will be funding the local project.

The RCAFA is currently working with a 16-year millage approved by taxpayers.

“So, we will have the revenue stream,” said RCAFA vice chairman Randy Smolinski. “The loan is about 15 years. We would expect the value of the millage to increase, as it usually does year by year. We could put more money against it and pay it off sooner.”