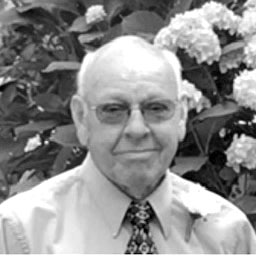 He was born in Pulawski Township June 6, 1933. He was the second of five sons to parents Leo and Joanna (Skowronek) Mulka.

He began his lifelong dedication to the Catholic faith by attending Mass and grade school at St. Ignatius Parish School. He attended St. Joseph preparatory school in Grand Rapids and St. Mary Major Seminary in Orchard Lake, graduating with bachelor’s degrees in theology and philosophy. He next studied two years at the American College in Rome, Italy. After which he served two years in the Army at Fort Ord, California as the company clerk. Returning to Michigan after his military service, he began work as manager at Posen Ace Hardware and Elevator. A job he held for 20 years until he became the owner, retiring after 40 years of working at Ace. As a young man, Dan played for the county baseball league.

A teammate, Aloysius Szczerowski, introduced him to his sister, Mary Ann. She would become his lifelong companion, marrying June 23, 1962 at St. Casimir Catholic Church. They would settle in the village of Posen before building their home on M-65 North near the church where they have resided ever since. Together they would have a family of five children, 13 grandchildren and two great-grandchildren. Dan would serve his community and church in many ways over the years. He taught high school CCD for 25 years, served on the Posen Consolidated Schools board of education, Presque Isle County Road Commission for 16 years, and as a Presque Isle County Museum board member. He joined Posen Knights of Columbus, serving as grand knight, 4th degree navigator, and district deputy for multiple councils. He had served for 40 years as lector and Eucharistic minister at St. Casimir Catholic Church. He worked at the Posen Potato Festival, serving as master of ceremonies for the parade, grand marshal one year, creatively designing floats for Ace Hardware as well as the kiddie parade, serving food for the Knights of Columbus and dancing the polka at the pavilion. Dan was an enthusiastic sports’ fan, whether it be watching local sports, Tigers’ baseball, University of Michigan football and even the Detroit Lions. He enjoyed bowling in the winter and golf leagues in the summer. He and Mary Ann loved to travel, returning to Italy and Poland during retirement, as well as cruises to Alaska and the Caribbean. He enjoyed camping and snowmobiling with his young family as well as weekend trips to the beach, often to Lake May or Hoeft State Park. Dan loved his garden, poring over seed catalogs and beginning in February to work with tomatoes in small pots under a grow lamp. He planted many fruit trees where he and Mary Ann would harvest peaches, pears and apples in the fall for canning. He was an avid deer hunter, berry picker and enjoyed searching the woods for wild blueberries and morels. Dan was a competitive card player, always up for a game of euchre, spitzer and especially pinochle.

Playing dominoes with family could turn into a raucous event with playful shouting by all. An annual family Christmas tradition was feverishly working to finish a new puzzle with Dan leading the charge. He loved to take photographs of the family, with a running joke that all are squinting into sunshine to get “the best light.”

He was the family historian, completing genealogy books for both Mulka and Skowronek sides of his family. He also completed the 125-year history of St. Casimir church. He reveled in his Polish heritage, teaching Beginning Polish at Alpena Community College for many years, continuing the traditions of exchanging Oplatki at Christmas Eve dinner, and enjoying Koledy before Mass.

He is preceded in death by his parents, Leo and Joanna; brother, Arthur; Virginia and David Schellie; Aloysius Szczerowski; Ervin and Theresa Szczerowski and Lois Szczerowski-Bruder.

His ashes will be inurned at the St. Casimir Parish Cemetery. He will be missed greatly by all who

knew him and had the joy to be around him.

A visitation service was held at Beck Funeral Home in Rogers City Friday, December 17, with rosary that evening followed by the parish wake service with the Rev. Stan Bereda conducting. A Catholic funeral Mass was held Saturday, December 18, with a visitation at the church from 9-10 a.m. at St. Casimir in Posen.